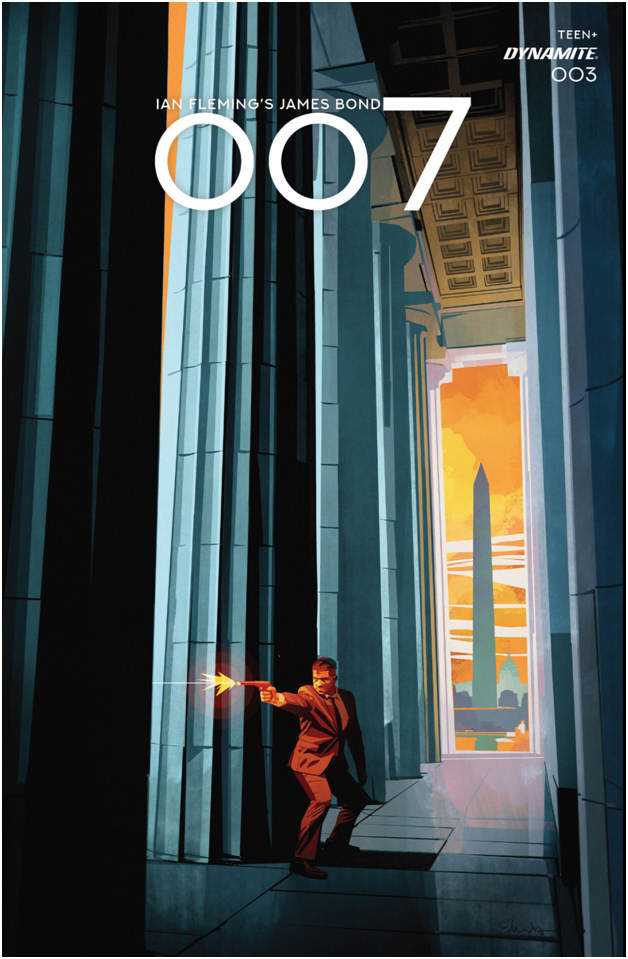 007 wakes up in the clutches of Myrmidon! Could they possibly recruit Bond to their cause?

Bond comes to in Myrmidon’s headquarters, getting a good look at the operation and meeting the head of the organization, Sebastian Fromm. Fromm reveals that he knows all about Agent Gann, how she went from being a mole to one of Myrmidon’s most valuable assets. Fromm wants 007 to take her place now that she’s gone. There is a former dictator, one Mahmoud Nassar, who will come back to power unless Myrmidon puts a stop to a high-level meeting. As it turns out, Bond and Gann have a history with Nassar. Fromm wants Bond’s help and in return will aid 007 in figuring out who murdered Gann. Bond seems unsure what to believe and gets released, but told he will be under surveillance. M makes contact with 007, who denies making contact with Myrmidon. 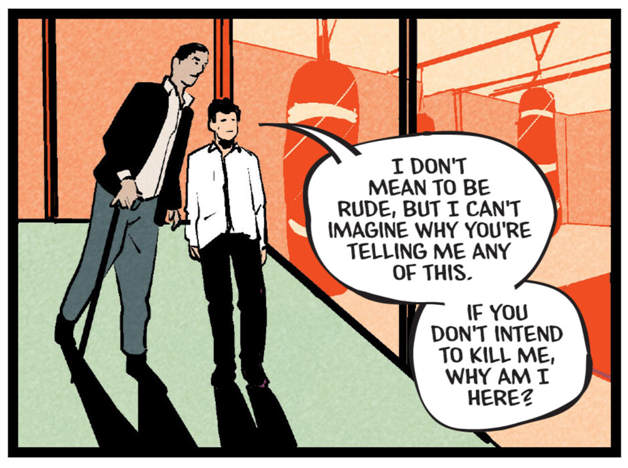 Phillip Kennedy Johnson continues his use of flashbacks this outing, with the one seen last issue having a great deal more resonance as the actions from long ago now gain new pertinence in the present day. The flashback action is very taut as 007’s sniper mission goes awry and Bond and Gann’s escape gets peppered in with events of the present day in a most effective manner. Once again, I really enjoy how Johnson plays with structure.

One important element in a Bond novel or film is when he meets the antagonist and we finally get that moment here in the reveal of Sebastian Fromm. Finnegan gives his entrance a grand debut, highlighting his introduction in a splash panel, save only for a small frame featuring Bond’s reaction. Whilst we see him in a wheelchair, his gigantism was lost on me for a few panels due to perspectives chosen in the art.

It’s hard not to think of a Blofeld-type the way he is introduced. His disembodied voice drifts across speakers as Bond explores the Myrmidon facilities. It definitely reminded me of the meteor scene in SPECTRE. There is an air of civility as he calmly lays out his position to Bond, trying to get him to understand his point of view. It feels very classic in its execution and from a writing perspective, was very well done.

The major issue with this series for me continues to be the art. It’s not to my tastes and the simplicity and lack of detail let down the story Johnson is telling. The shape of Bond’s head changes constantly, backgrounds are often minimal, and characters often look stiff. The colouring tries to make up for it, but even the Ben-Day dots used in the flashbacks can’t save the visuals.

It’s really a pity as I’m very invested in the story. I have no idea where Gann’s true allegiances lie, if she’s really dead, and how Bond is going to go about resolving any of this. Bond’s interactions with the antagonist and his henchmen are pitch perfect, particularly how he bristles at being called “Jimmy”. I can’t wait to see this all come to a head! Despite not loving the visuals, I would still recommend this series for the intriguing story that gives us insight into 007, whilst still keeping him a bit enigmatic.