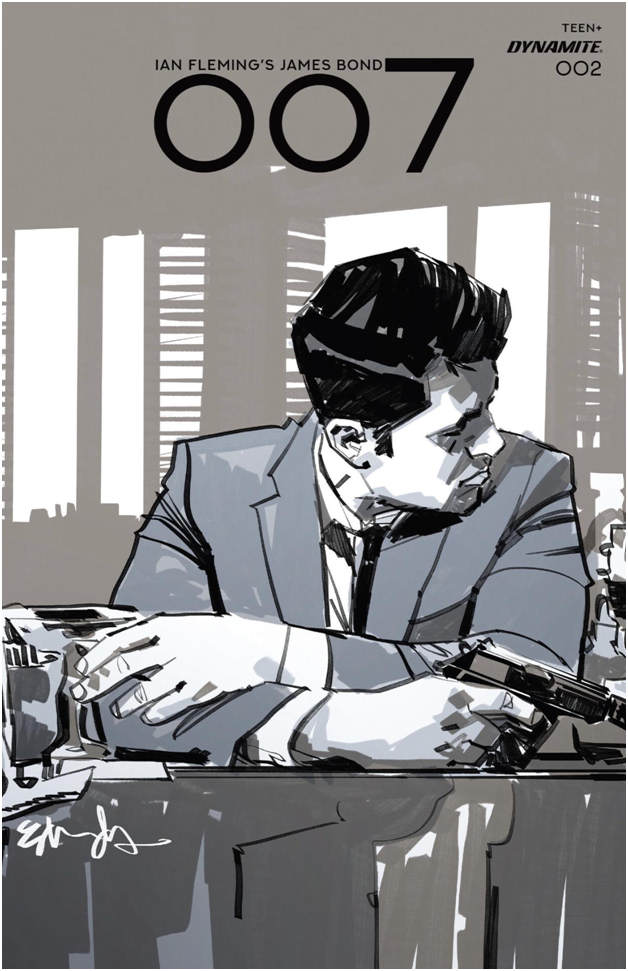 As OO7 mourns the loss of Gwen Gann, the sinister forces of Myrmidon target him at home! Will they catch Bond off-guard?

007 and a small group of MI6 staff attend the funeral of Gwen Gann, 003. Bond later joins several OOs as they pour a drink out in remembrance. M tries to bring 007 in on what Gann was actually working on, but Bond is too angry with his boss to cooperate at the moment. Returning to his flat, 007 gets ambushed by Myrmidon and subdued. 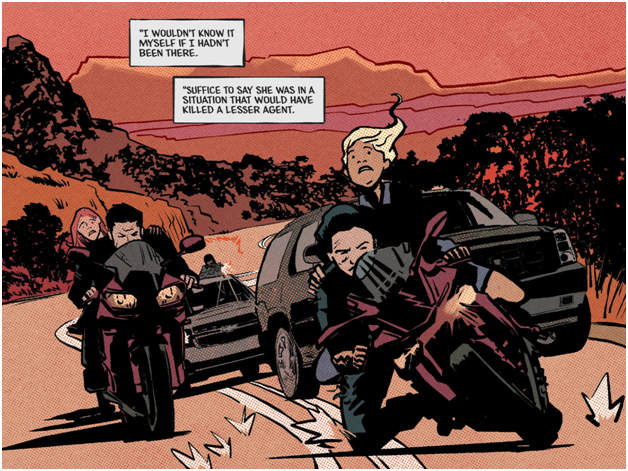 It’s hard to not hear the score to Skyfall as this issue opens with a military funeral and we see a coffin adorned with a Union Jack. Writer Phillip Kennedy Johnson once again employs flashbacks to showcase Bond’s past history with Gwen Gann. I’ve really been enjoying how he weaves it into the narrative. It helps set the pace and gives one insight into how much Bond cared for his fellow agent. Let’s be honest, OOs tend to come and go around Bond, so it’s not hard to imagine scenes like this happening “off-camera”. I appreciated Moneypenny offering solace to 007 at the service. It felt fitting that she would be there for him.

Meeting with fellow agents after the service at a nearby pub adds to a sense of camaraderie for the MI6 team. Whilst none of the other agents are ones readers would be familiar with, their quick tales add a layer to the legend of Gwen Gann and why 007 holds her in such high regard. It’s hard not to see shades of No Time To Die as the mourners pour a glass for the absent party who is being remembered.

More echoes of the Daniel Craig era were present as M and Bond converse in dark London streets, with Bond upset about M’s secrets, walking away from his boss. If it wasn’t for Bond’s sorrow, I’d have a harder time accepting 007 shirking his duty. Or perhaps it’s all a ruse. After all, M seems to think Myrmidon has “people everywhere.”

I appreciated the “old school” spy craft of Bond leaving a toothpick in the door jamb to note intruders. It felt very From Russia With Love and also highlighted Bond’s cleverness. We get another nod to Skyfall in the dialogue, which I found appropriate and maybe a visual reference to Henry Cavill “cocking his arms” to fight Tom Cruise in Bond competitor, Mission: Impossible-Fallout. I think it’s also fair to say shades of Tomorrow Never Dies are also present as 007 tussles with Brooks in a brutal fight at Bond’s front door!

As much as I appreciated the story elements, I hate to say that I am just not enjoying the art once again. Artist Marco Finnegan has no consistency when it comes to depicting Bond’s expressions and looks. Faces often seem simplistic and unfinished. While that can be typical of comic art, it doesn’t fit the tone that is being established by the story. The fight choreography is strong, but the details just aren’t there, relying on the colours to give any sense of background.

I continue to enjoy the Ben-Day dots that clue the reader in to the flashbacks. I also appreciated the noir aspects of the scene between Bond and M, with the head of MI-6 cloaked in shadow, trench coat collar turned up, giving him a private detective feel. These elements just don’t outweigh how disappointed I am with the art.

Writing-wise, this is another strong entry from Phillip Kennedy Johnson. If you can get past the lacklustre art, there is an intriguing story to enjoy, one with many allusions that make you feel entrenched in the world of 007.