Home > Features > The Bond Novelizations Part III: Tomorrow Never Dies, The World Is Not Enough and Die Another Day

The Bond Novelizations Part III: Tomorrow Never Dies, The World Is Not Enough and Die Another Day

After the success of The James Bond Bedside Companion, American author and Bond fan Raymond Benson was appointed by Glidrose to lead the literary 007 into the late 1990s. 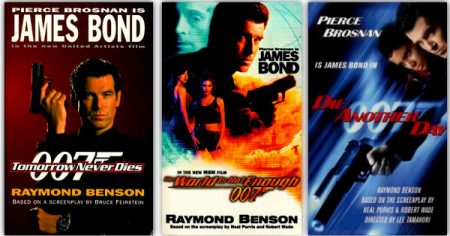 At the time, the book Bond and the cinematic Bond seemed to merge universes, as a female M was introduced in GoldenEye and Admiral Sir Miles Messervy retired from the service in COLD, John Gardner’s last 007 novel published in 1996.

On April 1997, some months before Tomorrow Never Dies was released across the globe, Raymond Benson had his first James Bond novel published: Zero Minus Ten. At the same time, the Texan was writing the novelization for the upcoming Bond movie, the second one with Pierce Brosnan in the leading role. In October 1997, two months prior to the film’s release, that the Tomorrow Never Dies book adaptation was published in the United Kingdom.

It is known that the production of “Bond 18” was a headache for everyone involved in it: the actors, the screenwriters, the director and the producers. They were running on a very tight schedule to reach the December 19 release date and modifications were made to the script in a matter of weeks.

The continuous changes of the film script are evidenced in the novelization, as the book bears some differences with the result displayed on the big screen. Some dialogue is presented in a slightly different way; some scenes added, others omitted; and characters who seemed irrelevant in the movie get a lot more relevance in Benson’s book.

Tomorrow Never Dies is a very interesting read. Perhaps the biggest point in the novelization is that it sheds some light on the aspects that in the film seem a bit obscure or rushed: who Elliot Carver was and how he built his empire (a story related to a childhood in Hong Kong and blackmailing his father, a British press tycoon who didn’t recognize him as a son), how he hired Stamper as his right hand and his deal with General Chang.

The relationship between Bond and Paris is one of the most remarkable spots of the book, as Benson dedicates time to explain the past of Carver’s wife, how she loved – and hated – Bond so much and why she fell for the media baron. The result makes us feel sorry her death, perhaps more so than in the movie.

Raymond Benson’s prose, much as in his continuation novels, is straightforward and simplistic. Descriptions don’t abound and the author throws the reader into shootings, fistfights and love scenes. Yet he allows himself to describe some settings as the red light zones of Germany, which harkens back a bit to Bond’s enjoyments in Berlin prior to covering agent 272’s escape in Ian Fleming’s short story The Living Daylights.

A reference to Zero Minus Ten is allowed as Bond asks M (the female M, of course) if he’s being sent to Hong Kong “again”. Among other differences, Charles Robinson is never in the book and Bill Tanner occupies his place as originally intended in the movie; M is threatened with being fired as her argument with Admiral Roebuck escalates much more than in the film; and the Stealth Boat showdown is somewhat different in structure.

The World Is Not Enough, released in 1999, was the first collaboration of Neal Purvis and Robert Wade for the Bond film series. The duo, together with Bruce Feirstein, provided a story dealing with oil fields, a nuclear submarine, and a young heiress marked for death by the terrorist that had previously kidnapped her – a woman that would manipulate Bond’s feelings in a unique way.

Raymond Benson’s novelization stresses on the relationships between Elektra (the heiress), Renard (the kindapper), Sir Robert King (Elektra’s father who refused to pay the ransom) and M (personal friend of the Kings). Benson’s trademark, a chapter where the villain remembers his past life, is given towards the end in Renard’s case it explains how and why he also fell to Elektra’s charms. Unlike the case of Tomorrow Never Dies, the novel is much tighter to the result seen in the big screen and the differences are slighter: much of the moments read in the novelization and omitted from the movie can be found on the DVD and BluRay extras.

Throughout the novel, Benson tends to reference Elektra as a victim more than as the actual villain. An example of this can be read at the end of the book, with a very short paragraph related to a Turkish lullaby song she shared with her mother (Benson’s idea) as a sort of redemption to the woman who wanted to take over the world. For some reason, this was omitted from the UK edition – a mistake by the publisher since it added some depth to the most interesting and complex character in the story.

The 40th anniversary James Bond film, Die Another Day, was also the last novelization made to date. Raymond Benson wrote this novelization in 2002, the same year his last continuation novel, The Man With The Red Tattoo, was also published.

Adapted from one of the earlier versions of the screenplay, there are a few extended moments in the book that for one reason or another were omitted in the movie: Bond and Miranda sharing a hot tub bath, 007 making a stop in Seoul and getting into a street fight before reaching Hong Kong and some differences during the VR simulation test, among other things.

If the film was known for references to the previous 19 Bond cinematic adventures, the novelization adds up some more: the dum-dum golden bullet with the 007 number engraved on Bond’s office, California Girls on a radio in Cuba, and a parrot repeating the words “give us a kiss”. Benson also helps Bond introspect a little as he is tortured in North Korea, remembering his old flames and enemies, giving the reader another chance to get some more 40th anniversary reminiscences.

In a classic Raymond Benson fashion, the novel doesn’t dwell too much in descriptions of people or locales and the dynamic moments are described in short and simplistic words, tuning the book in a quick read. As he did in Tomorrow Never Dies and The World Is Not Enough, the author dedicates a whole chapter to describe the villains’ past life. The case of Colonel Moon and how he forged his allegiance with Miranda Frost is a very interesting read and it fills many of the gaps from the movie, whose elaborated dramatic moments were quite subdued by the CGI stunts and slow-motion camera editing.

Raymond Benson provided a more linear approach to the Bond scripts that were turned into a novel, far from John Gardner’s detailed paragraphs of espionage moments and Christopher Wood’s originality that was rather detached to the finished results on screen.

Yet, this simplistic narrative wasn’t without drama or inventiveness: The World Is Not Enough is perhaps the most elaborated and dramatic, with the handling of Elektra King’s innocence or culpability among the book pages. On the other hand, Tomorrow Never Dies and Die Another Day are more straight-forwarding in comparison, but nevertheless a very interesting read to explore a little more than what we saw on screen.

One Response to “The Bond Novelizations Part III: Tomorrow Never Dies, The World Is Not Enough and Die Another Day”