The Bond Novelizations Part II: Licence to Kill and GoldenEye

British writer John Gardner wasn’t new to the world of James Bond in 1989, when Timothy Dalton’s second film as agent 007, Licence to Kill, was released. 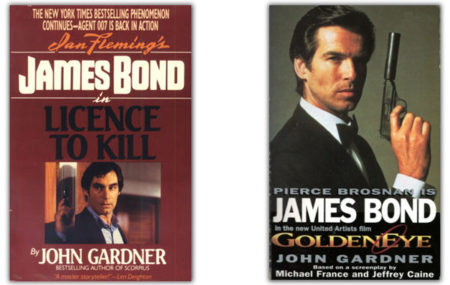 By that time, the former Royal Marine commando and writer was firmly established as the man who resurrected Ian Fleming’s spy for the 1980s.

After Ian Fleming’s death in 1964, Gildrose (now Ian Fleming Publications) commissioned Kingsley Amis to write the first of the continuation Bond novels, Colonel Sun, in 1968. There was a 13 year literary gap for 007 (only interrupted by Christopher Wood’s novelizations) until John Gardner was chosen to become the third Bond book author in a long lasting series of novels starting with Licence Renewed in 1981.

Through his fourteen James Bond novels, Gardner’s narrative was somewhat unique and different than Fleming’s: the stories were more elaborate and full of twists, chases and shootouts, and lots of violence. Many paragraphs abound with details on weapons, wounds, vehicles and military proceedings, surely taken from his martial background.

The script for Licence to Kill, written by Michael G Wilson and Richard Maibaum, had Bond resigning from the secret service to avenge the attack to his friend Felix Leiter perpetrated by a drug kingpin: an attack taken from Ian Fleming’s second novel Live and Let Die, where Leiter is fed to a shark by the infamous Mr Big and in consequence loses an arm and a leg.

Being mostly an original story with some of Fleming’s elements from Live and Let Die and the short story The Hildebrand Rarity, the John Glen directed film received the novelization treatment as well and John Gardner, as the official Bond author, was commissioned to adapt the script into a novel.

The British author had a challenge: to dissociate the book from the series and make a standalone story in a parallel universe, or to fit the story into the existing series. He did the latter, having Leiter being fed to the sharks once more and losing his artificial extremities. There is also a mention of the CIA agent being married for the second time, which would link the story to Gardner’s novel For Special Services, where 007 is assisted by Leiter’s daughter Cedar.

Another link to Gardner’s literary Bond has 007 receiving a passport with the name James Boldman from Q, an identity the secret agent uses in Win, Lose or Die and Nobody Lives Forever.

The novelization is rather loyal to the movie and is expanded with many scenes that didn’t make it into the final print, most of which are now available on the home video releases. One of them sees 007 on his hotel room, watching a news flash on the villain Franz Sánchez arriving at Isthmus City. What the book allows us to see is Bond’s indignation on seeing the man who tortured Leiter joyful and free after escaping captivity and being protected by the law.

Much in Gardner’s style, the book doubles the intensity of the violence seen in the movie, mainly Krest’s death and the shootout inside the Key West warehouse, where 007 shoots a goon between his legs.

After Licence to Kill, James Bond would be out of the screens for six and a half years to return with Pierce Brosnan’s face in GoldenEye. Once again, John Gardner turned the script into a novelization.

The literary version GoldenEye is a masterpiece in every aspect. Once again, all of Gardner’s knowledge of weapons, vehicles and military and intelligence protocols play a good part in making this book an enjoyable ride. The author makes a good use of the historic subplot involving the fall of the Soviet Union and how that aspect involves the relationship between James Bond and the villain, his former colleague and friend Alec Trevelyan aka 006.

There aren’t many alterations to what the audiences watched on the theatre screens in November 1995, except that the escapism is considerably reduced: at the end of the Archangel mission, Bond simply captures the plane on land instead of jumping to catch it in mid-air.

Many moments benefit from being extended, like the reencounter between Bond and Alec. This scene is smartly expanded and given a more reflexive shade when the latter contraposes trust and ideology with free market economy and mercantilism. Also very interesting and never shown in the film is the tricky way 007 and Natalya leave St Petersburg for Cuba with the aid of Jack Wade making Bond pose as a retired general and Natalya a scholar with the aid of some makeup.

The characterizations are also very good: there are genuine reactions of hate and terror between the protagonist and the antagonist, particularly during the final pages where the two have their ultimate showdown atop a giant antenna in Cuba.

The feelings of this Bond are completely disclosed through Gardner’s narrative as he feels dizzy and wanting to vomit as discovering his old friend is the man behind the big threat he’s sent to investigate. There is also another connection to his regular Bond novels as 007 makes love with Natalya and alludes to Flicka von Grusse, a love interest who ended up in critical condition after the events of Seafire.

Unlike Christopher Wood’snovelizations, John Gardner barely reveals a few aspects of the characters previous life: in Licence to Kill, we know Franz Sánchez is the son of a German fascist woman and a Panamanian businessman and his relationship with Álvarez, a previous co-worker who ran away with his girlfriend Lupe Lamora; in GoldenEye we are disclosed of some details on the past life of Natalya Simonova, mainly of her love for the Caribbean and her conservative parents.

More than dealing with the characters’ past, Gardner focuses on his strong points: the realistic description of action scenes, weapons and vehicles, making both Licence to Kill and GoldenEye a delight for the thrillers aficionados.

Part III of this novelizations feature will cover the last three James Bond novelizations: Tomorrow Never Dies, The World is not Enough and Die Another Day, all by American author and Bond fan Raymond Benson.

One Response to “The Bond Novelizations Part II: Licence to Kill and GoldenEye”