Home > Features > Review: With a Mind to Kill

Review: With a Mind to Kill

A look at the third and final James Bond novel by Anthony Horowitz. 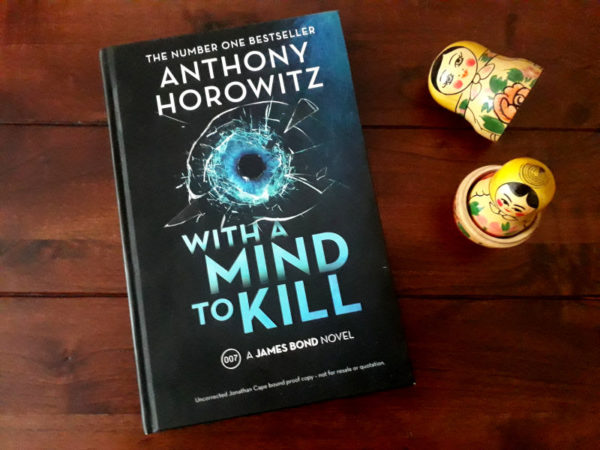 By the time you read this review it may well be redundant. The publishers kindly sent me a review copy earlier in the year, but – thanks mainly, I suspect, to the Spanish postal service – it never arrived. They couriered a second copy, but the result is this review published almost a fortnight after the book was first released.

Anthony Horowitz already published two previous Bond adventures. Trigger Mortis was set just after the events of Goldfinger; Forever and a Day was set prior to Casino Royale; and now With a Mind to Kill takes place after the events of The Man With The Golden Gun and is directly influenced by events that occur in Ian Fleming’s final Bond novel.

The book starts at M’s funeral, which is no spoiler given that the book’s blurb advertised that. And after establishing what has happened and where it’s leading the novel rockets along. It’s certainly fast paced. It took me a few hours to read about half the book and it’s an enjoyable read.

But there are some problems too. One is that the heavy handed call-backs to Fleming’s books that are littered throughout With a Mind to Kill. And the book seems to lean too heavily on From Russia, With Love too. But while this time Bond actually sets foot in Russia, we don’t really get a sense of being there. Compare this with the Istanbul scenes in Fleming’s book. And the Bond girl seems to be little more than a watered down Tania Romanova. While she does guide Bond – and us – through USSR-era Russia she is no Darko Kerim either.

In Fleming’s books Bond’s meals are often described in mouth-watering detail, and here seems to be a lost opportunity when Bond eats his numerous Russian meals. But then again, having visited St Petersburg in the mid-1990s, maybe they are just not worth describing. And I concur completely with Bond’s dismissal of Russian “champagne” in favour of vodka.

On the other hand there is some terrific action. Early on Bond is forced to flee after being captured. The writing is genuinely exciting. Later on there is more action, Bond forced to fight for his life and continue his mission. And the finale when he must return to the west. In these moments the book is hard to put down. But I don’t really buy Bond’s mission and all the mind control. It worked in The Man With The Golden Gun because  Fleming didn’t elaborate too much. While Horowitz has researched mind control methods I just didn’t believe it.

So overall it’s a bit of a mixed bag. The writing is certainly well up to standard, fast-paced and exciting in all the right places. When I started reading it seemed like it might be the best of the Horowitz trilogy. Perhaps it was being caught two weeks behind and under pressure to read and review the book, but for me it sometimes falls short as a James Bond novel.