Home > Features > Review of Thunderbook: The World of Bond According to Smersh Pod

Review of Thunderbook: The World of Bond According to Smersh Pod

Eoghan Lyng take a look at the forthcoming Thunderbook: The World of Bond According to Smersh Pod. 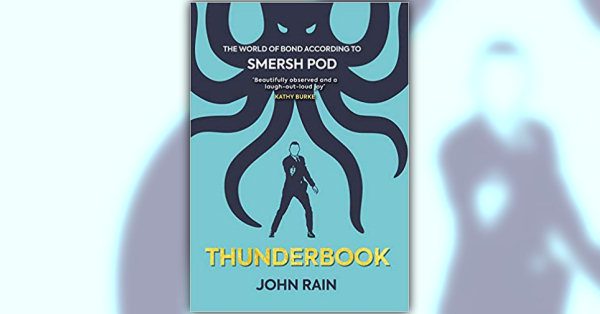 Cruising the twenty five film podcast (he watched Never Say Never Again as part of the series, the poor sod!), Rain’s changed from radio voice to literary voice, providing a work that imitates a remarkable journalistic flair comparable to Ian Fleming himself.

Rain’s favourite Bond is Timothy Dalton, as is mine, yet Rain doesn’t let a bias offshoot his opinion of the series as he pays attention to the varying different strengths each actor brought to the series. Sean Connery is praised for pure, uncut sexuality, Pierce Brosnan is commended for Frankie Howerd style wit, while A View To A Kill ends with a lovely dedication to the actor formerly known as Roger Moore (he’s likely a knight in Valhalla too!).

The art of writing and recording require very different levels of craft, but this is a beautiful translation that captures the fun filled frolics Rain shared with his guests (among them comedy writer Joel Morris, journalist Julia Raeside, comedian Robin Ince and the pub landlord himself Al Murray ).

Many Bond books, however impressive the knowledge displayed, tend to to venture more towards factual instead of fun. Rain’s book throws itself into the world of fun with chocolate sprinkled confectionaries splashed all over the pages.

His is a wit that matches Tom Mankiewicz, puns piling over the pictorial pages with a direction that suggests he has a healthy career in writing ahead of him. When he writes of the legal wranglings which would wade the water abyss Bond would cross for the next six years (from Licence to Kill to Goldeneye), there is a bitter sense that Rain speaks for every Bond fan who had a poster of Dalton among their eighties pop mags.

Luckily, Rain is a real fan, so we’re not going to read “John was three quarters of the Beatles” level tosh we’d read in other places. There’s a real sense of warmth felt in the typed words that call to attention the Christmas cheer Bond has bestowed families all over Britain and Ireland. And yet Rain lets his inner fan lead, not impede, his true feelings.

He gives the doublet of Mendes features the wagging they deserve for being needlessly portentous at points and calls attention to Connery’s attention to commerce, not art, which drew him to Diamonds Are Forever. His is a writing irreverent in approach, but reverent in topic, as he concludes that when Craig returns, so shall he.

The book may end, but our love for Bond won’t!

Order Thunderbook: The World of Bond According to Smersh Pod from Amazon UK and Amazon.com