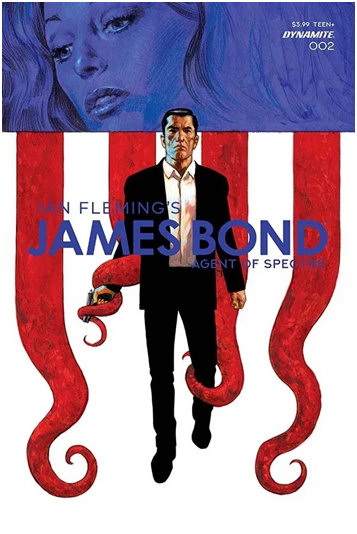 James Bond is working for Blofeld! What surprise awaits him when he tries to take out his target?

Bond begins his infiltration of SPECTRE by targeting a fellow SPECTRE member and business partner of Titania Jones, one Harlan Clark. When Bond’s spying goes awry because Clark returns home early from an engagement, he has to eliminate the target before he can hack into his files. Fortunately, 007 did get a glimpse of Clark’s engagement calendar and Blofeld gets Bond into a charity fundraiser that Titania Jones will also be attending. Bond makes contact with her and turns on the charm, only to be seemingly rebuffed. It’s all a front though, and Jones ditches her bodyguards to meet 007 in secret at the sculptures exhibit. However, she didn’t abandon all her bodyguards, as Felix Leiter appears, pulling a gun on 007! 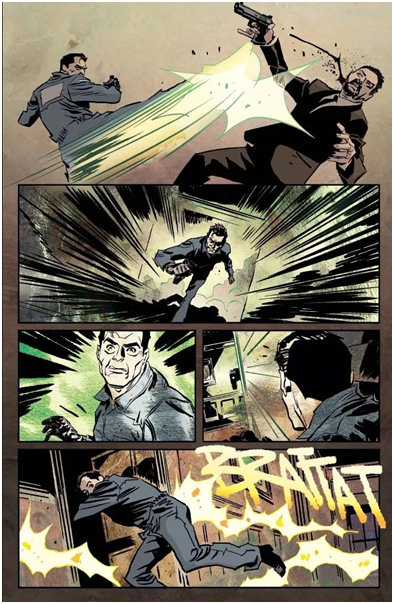 After a strong first issue, Gage opens up with some Sneaky Bond before delivering the first action scene. Casalanguida imbues the scene with his usual dose of high-octane energy as 007 dives around corners taking out the guards. Bond is ruthless and efficient as he utilizes his licence to kill on Clark. Casalanguida gives Bond all the power over his opponent with how he stages the scene.

A quick flashback to MI6 reveals that the Home Office, or at least M and Moneypenny, are in on Bond’s gambit. While it may appear to the rest of the world that 007 has gone rogue, these three know the truth. I responded to the fact that Bond brought them in and while he’s not officially sanctioned, he’s not simply running wild, having the foresight to set up evidence that he’s been bent, leaving M and Moneypenny in the clear. Bond is playing a part here. The question is, does Blofeld know? Would it matter to him anyways, so long as Bond is serving his purpose?

Transitioning to the Corcoran School of The Arts and Design puts Bond once again in a high-class social setting. We get our first glimpse of Bond’s target, Titania Jones, and she certainly seems arrogant enough to think she could take on Blofeld to control SPECTRE. There’s a lot of reading between the lines in her conversation with Bond, who seemingly is trying to pick her up at first. It speaks to their intelligence and cunning as they try and read each other.

When they finally reveal their true intentions at their private rendezvous amidst the sculpture gallery, Bond, and the readers, get another surprise-Felix Leiter! He’s one of Titania’s bodyguards, which would add to SPECTRE’s knowledge of him and how Blofeld would know where and when to target him, should 007 not comply. It was a twist I didn’t see coming, while at the same time, keeping with a cinematic tradition of having Felix seemingly at odds with Bond at first. Gage doesn’t stop there, however. Bond and Felix wind up in a standoff, with 007 unable to stand down when Titania draws a gun as well! In an excellently paced cliffhanger, we are left wondering about the fate of one of the characters!

Gage and Casalanguida have done it again and crafted a solid chapter in James Bond: Agent of SPECTRE. Gage’s story is well-paced, delivering moments that Bond fans expect, whilst still adding in some surprises. Casalanguida’s art is always welcomed, adding danger and an element of noir. While this is comics, where shock endings tend to be overturned in the next issue, I was still on the edge of my seat with this issue’s conclusion and I can’t wait to see what comes next!