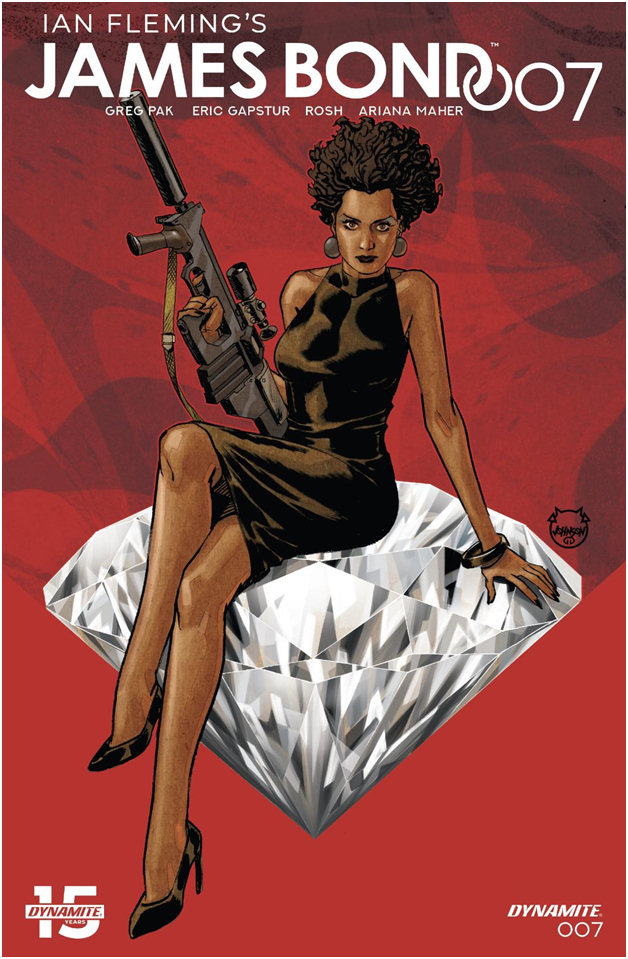 James Bond confronts Goldfinger in a game of chance as Oddjob looks on. What could possibly go wrong?

In a London casino, James Bond observes Goldfinger cheating at a poker table…except Goldfinger is losing intentionally! Bond interrupts the game and wins big. He later talks up Goldfinger and entices him with some family heirlooms made of gold that he’d like to sell discreetly. Goldfinger invites Bond to visit his offices tomorrow.

Bond tails the man Goldfinger was losing to and interrogates him, learning that whatever the villain is scheming, it involves diamond mines in South Africa. Bond reports back to MI6 who orders him to keep his appointment with Goldfinger for further leads.

007’s cover is quickly blown and Goldfinger orders Oddjob to eliminate Bond.The henchman proposes a different idea – have Bond take over for the man who recently dropped out of their operation. Goldfinger hesitates, but Bond replies that he’s up for the challenge.

When it was announced that Oddjob would be in this James Bond 007 series, I didn’t necessarily think about Goldfinger being along for the ride, although I probably should have. As this series has gone on, John Lee has slowly taken over the book, with Goldfinger becoming a rising threat. What started off as a fresh, modern take with Pak distinguishing this Oddjob, has morphed into a Goldfinger movie remake as of this issue.

The story opens on Bond making his entrance into a local casino and catching the eye of a woman at the bar. It definitely feels like cinematic territory here as the two flirt. Moneypenny then sets up the situation to Bond over his earpiece,with M informing him that as Oru Prime, Goldfinger is responsible for over 13,000 deaths. Pak is trying to set him up as far more threatening than past iterations, but I’m not sure it needed it. He’s already come off as menacing enough in prior issues.

What follows next is the 21st Century version of the Fontainebleau hotel scene from the 1964 film. However, instead of the lovely Jill Masterson, Goldfinger is being assisted with his duplicity by a pair of glasses that allow him to see what the cards are hiding. Bond being Bond, has got a bit of technology of his own to disrupt the proceedings. The twist here is that Goldfinger is supposed to be losing and to someone specific. The mark is very shocked when Bond gets all the winnings that should have gone to him as evidenced by the exaggerated expression provided by artist Gapstur. Bond looks cartoonishly pleased with himself, once again the cat that got the canary.

In order to keep the Goldfinger remix going, Bond woos his way into Goldfinger’s bad graces by brandishing a pair of gold cufflinks instead of dropping a gold bar on the golf course. Goldfinger has a discerning eye and Bond wonders what he could get for them and other items in his modest collection…provided that there’s no record made of the transaction. Goldfinger takes the bait and agrees to meet the next day.

Bond witnesses the other player cause a small scene with Goldfinger and later storm off. Bond tails and confronts the man. What follows is a clever bit of interrogation as the man believes Bond is working for Goldfinger and 007 does nothing to dissuade him of that. Bond plays into it, getting the man to talk without force and reveal that the scheme has something to do with diamond mines in South Africa. Bond lets the little fish get away and reports to MI6. I appreciated seeing Bond’s ingenuity and improvisation to get what he needed instead of the blunt instrument approach.

When 007 keeps his rendezvous with Goldfinger the following day he of course runs in to Oddjob, who is serving as Goldfinger’s bodyguard. Bond doesn’t believe Mr. Lee has identified him since he’s got an Oru plug on the back of his neck, which has affected the memory of others. This brings us perhaps to the best character scene of the issue – Moneypenny asks 007 if he would kill Lee right now if she ordered him to and Bond, seen only in silhouette, pauses and remarks for her to give the order and they’ll find out. It’s very well executed, if you’ll pardon the pun, as we see Bond at one of his darkest moments and just briefly pull the curtain back at the pathos within.

Bond is wrong about Lee, though. Oddjob catches 007 sneaking around and reveals that whilst he’s not under mental control, he’s still there to save Aria and Bond needs to leave. Their tête-à-tête gets interrupted by Goldfinger and his soldiers, with Goldfinger ordering Oddjob to eliminate Bond. Pak twists the story again whilst still maintaining familiarity, with Oddjob suggesting that Bond can assist them with their upcoming job. With a characteristic flourish, Bond straightens his tie and insists he’s always up for a challenge. If only Lee had called it “Operation: Grand Slam”! Maybe next issue.

This is artist Eric Gapstur’s first crack at 007 and I found it to be a mixed bag, to be honest. He’s a very competent artist, with each character looking distinct and the storytelling easy to follow. However, as touched on above, there can be a cartoonish element to his art, which can come off more as a simplified caricature at times, like in the casino. It just doesn’t feel like a good fit for Bond to me. The grain we’ve seen present in prior entries is still here to add grit and textures to the images, which does help offset the tone some that the art imbues upon the proceedings. If anything, it at least adds some visual consistency in a book that is on its third artist.

Despite some very familiar beats, Pak puts enough spin on it for it to be entertaining and keeps the focus primarily on Bond for this issue, a rare treat indeed. I’m left feeling very curious how far he’s going to push the similarities with the film. So long as Bond doesn’t get lost in the shuffle, I’m fine with it. The art, though talented, feels like a mismatch for this book and the precedent sent by the two prior artists. Maybe I’ll warm to it next issue, but for now it just seems out of place.