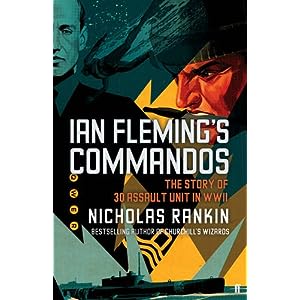 One thing clear from reading about the life of Ian Fleming is that while he found it difficult to apply himself to his career during peacetime, his role as personal assistant to the Director of Naval Intelligence during the Second World War brought out the best in him. It was during this time that Commander Fleming was able to apply his vivid imagination, social graces and organizational skills, to the task of obtaining intelligence that could be turned to the advantage of Britain in the fight against Nazi Germany and Italy.

Part of his role in Naval Intelligence is told in the new book Ian Fleming’s Commandos, which is a comprehensive history of 30 Assault Unit (30AU), conceived of by Ian Fleming to “pinch” secrets from the Axis powers to help Britain’s war effort.

Rankin’s book uses a typically Fleming device of throwing the reader into the action in the first chapter and then covering the details of how that point was reached in the following pages. The book starts with a raid on Dieppe, which Fleming attended as an observer; being privy to the inner workings and secrets of the Naval Intelligence Division (NID) made him far to valuable to risk falling into enemy hands.

Knowing something of Ian Fleming’s life meant that I found this first chapter disconcerting, as its focus was on action rather than providing the background to 30AU. However, my initial reservations dissipated once I started the following chapter; the book got into stride and I could hardly put it down.

It covers how Fleming conceived of the idea for 30AU and how he managed to cut through the red tape and bureaucracy that would have otherwise have smothered it; and once given the green light, recruiting officers for the commando unit specifically to grab German and Italian secrets.

The kinds of secret 30AU was tasked with locating ranged from Enigma code machines and code books to the latest naval developments such as torpedoes, mines and submarines; towards the end of the war their remit included any documents that could help give Britain an advantage in the post war era.

The book gives some background to the work being undertaken in secret at the time, including the code breakers at Bletchley Park, one of whom was Alan Turing, father of the modern computer, and how their requirements sometimes dictated the targets for 30AU.

The author was able to interview former members of 30AU, some of whom exhibited extraordinary courage while on missions. However, the book is also a reminder of the incredible losses suffered by both sides, as well as the magnitude of destruction throughout Europe.

It also offers a reminder of the shear scale of the operation to retake Europe from the Nazis and the chaos that ensued. On one occasion members of 30AU came across German documents strewn about a recently evacuated building; lacking the means to remove them then and there, the documents were sorted into some kind of order to be collected at a later date. However, a day after moving on an American unit set up camp there and burned these documents!

The latter stages of the war were also marked by inter-service rivalry, with SHAEF (Supreme Headquarters Allied Expeditionary Force) and CIOS (Combined Intelligence Objectives Subcommittee) attempting to coordinate intelligence gathering across the multiple intelligence gathering units that had been formed; they had grave misgivings about the work of 30 Assault Unit and attempted to control their activity.

Perhaps it is this that inspired the rivalry between SHAPE and the M in the short story From A View To A Kill, and Bond’s spiky relationship with Colonel Schreiber, SHAPE’s Chief of Security when he is sent to investigate the assassination of a British dispatch-rider.

Fleming himself plays quite a peripheral role in much of the book; although his contribution to founding 30AU was invaluable, this book covers a very small part of Ian Fleming’s story and once the unit is operational Fleming hardly figures at all. While that isn’t a criticism of the book, its title may lead some readers into thinking the book’s focus is on Fleming; for a more comprehensive biography you should check out Andrew Lycett’s excellent biography of Ian Fleming.

If you’re interested in learning more about Ian Fleming’s achievements during the Second World War, or are interested in military history, this book should definitely be on your bookshelf.

Thanks to Faber and Faber for providing a review copy.