Home > Features > Review: He Disagreed With Something That Ate Him

Review: He Disagreed With Something That Ate Him 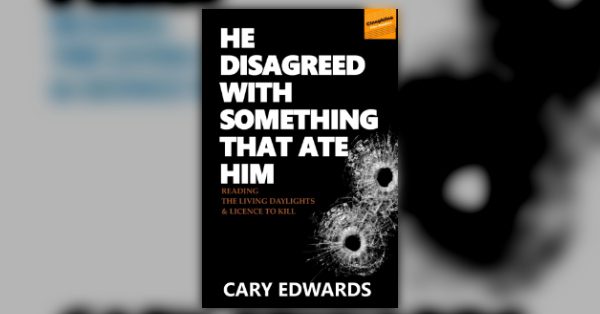 Finally, someone gets the Timothy Dalton films. Through Cary Edwards’ monograph, readers are invited on a methodological study through the narratives, strengths, virtues and zeitgeists presented throughout the two Dalton films. Sharply written, sharply presented, sharply edited, it sharply delves into the era where Dalton strode sharply on Franz Sanchez’s deck.

Edwards understands the importance signifiers such as the gunbarrel walk, pulsating score, visual cue and other iconographies held on the film, Edwards cannily explores how the Dalton films differ from their respective milieu. The Living Daylights, inarguably the more faithful to the Bond formula, is noted for portraying a Bond scornful of his employment and mindful of the uses Moneypenny could bring him.

Lead woman Kara Milovy is credited for being different to her predecessors, noting how much more heroic she becomes throughout the film, while Anya Amasova becomes decidedly less so, despite the promise that she is Russia’s top agent. Unlike many of its action peers, Daylights is ambigiously prescient in how it shows the villainy at play. Pushkin, a brusk Russian agent, is more foe than threat, while the decidedly American Brad Whittaker sides himself as a villain.

Then there’s Licence To Kill, a savage look at the consequences at revenge. Edwards’ tastily remarks “many of the initial critics of Dalton’s films argued that they had gone too far from their source, that they were too different from the rest of the series. Ironically many of the changes are due as much to Fleming as the filmmakers”.

The visceral violence protrudes the film with a rush in place of absent sex. Coarser language mirrors the works of the novels, fiery and unvarnished, Dalton’s Bond exhumes anger verbally and physically. Though replete with opinion, Edwards never distracts his readers away from the primary sources that guide the films that many of us hold so dear. Though Licence was largely dismissed during the Pierce Brosnan era, contemporary reviews were often laudatory; The Los Angeles Times thought it a “top five or six” Bond.

Edwards opens the book with an interview with Scott Meslow, a 2014 discussion where Dalton claimed he turned down the opportunity to continue making films as it would take the rest of his life. Whether Edwards’ himself believes this, let alone any other reader, is irrelevant. This is no work of conspiracy or conjecture, rather a meticulous look at the how’s and what’s which can be sourced and read.

Age is a matter that influences Bond films, Edwards’ noting that at nearly forty he isn’t the clientele for Daniel Craig’s audience. At twenty five, I probably am of that audience- and I don’t think Craig, barring Casino Royale, can match Dalton for scope or depth.

Edwards posits the scope and depth of a lost third script, using interviews to picture the goings of a film most Bond fans lament. Interestingly Goldeneye, the only Brosnan film of great artistic worth, stemmed itself from the roots of a Dalton project, action scenarios recalling the Welsh born’s beats.

Edwards has compiled a well calibrated, articulative and invigorating work. He should have his Licence Renewed for another!

He Disagreed With Something That Ate Him: Reading The Living Daylights & Licence to Kill by Cary Edwards is available to buy from Amazon UK and Amazon.com
Want to help this site go ad free? Click here