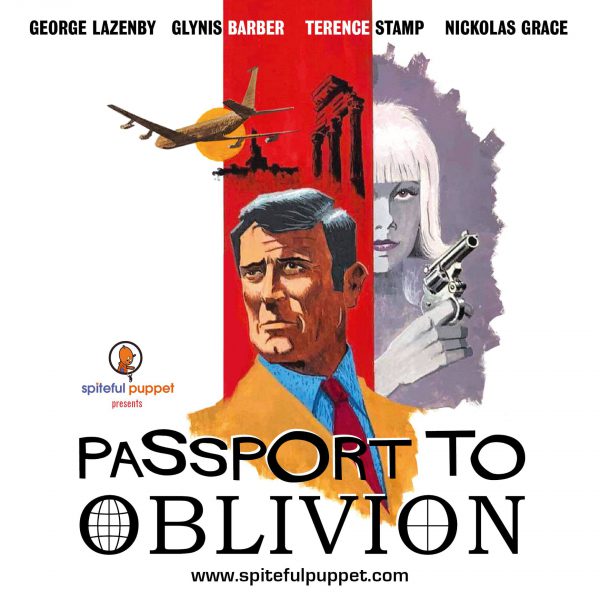 I must admit that prior to the announcement of this audio thriller I was unfamiliar with the writings of James Leasor, the adventures of his character, Dr. Jason Love, and the novel, Passport to Oblivion. I did a little research and found that not only was this a very popular series during the height of cinematic Bondmania, but it was also a major motion picture, Where the Spies Are, starring former Bond (if you count Casino Royale), David Niven, in 1966! Furthermore, Leasor was approached to be the first 007 continuation author, but passed, not wishing to replace Fleming.

With this backdrop in mind, it’s easy to see why Leasor was in consideration to carry on for Fleming as Passport to Oblivion gets underway. When we first hear George Lazenby as Dr. Love a patient is coming on to him very strongly. This gets interrupted when two young troublemakers deface his prized vehicle, a Cord roadster. In addition to attracting the opposite sex and a love of well-made fast cars, Dr. Love also has a favourite drink, Bacardi with lime juice and ice.

Despite some similarities, Love is not Bond. He’s a country doctor from Australia, now residing in Somerset. He aided the British on a mission in Burma during World War II and has been quietly carrying on with his practice until Agent K has gone missing. With several agents having recently been turned by the Soviets, British Intelligence has decided an outsider might be best to investigate. Realizing an upcoming conference regarding Malaria would provide a perfect cover, they’ve turned to Love as their man to snoop around and get to the bottom of things.

The quality of the production is top notch. Ambient noise draws you in and creates an aural environment that sells the locations. This is enhanced by the musical score, complete with its own Bondian-inspired main title track. It’s easy to picture a Maurice Binder-esque sequence as it plays.

Of course, the big draw here is George Lazenby, returning to the role of spy. There are those who have criticized his delivery in On Her Majesty’s Secret Service as stiff and wooden, but they’d be hard pressed to complain about his performance here. His voice is natural, his delivery smooth and authentic to the various situations he finds himself in. In short, it’s a joy to hear him bring nuance to the role, one I hope he returns to in the future.

A great deal of fun for the listener comes from Dr. Love’s inexperience in the spy game, allowing for a great sense of tension at times when he gets in over his head. He may have skills and his manner of attacking things methodically is of great aid, but he is still relatively unseasoned and not the smooth know-it-all operator Lazenby has portrayed on the big screen as “the other fella”. You believe Love can pull off his mission, but it’s barely by the skin of his teeth.

Rounding out the cast are Glynis Barber, Nickolas Grace, Michael Brandon and Terence Stamp. Barber is fantastic as Simone, Dr. Love’s contact. I was disappointed that Terence Stamp didn’t have a bigger role, but as C, head of MI6, it’s understandable when you think of how often we saw M in the early Bond movies. He still does magnificently with the time he has and brings the gravitas the part requires.

The story itself is an engaging, twisty romp, complete with mysteries and double crosses. Despite being set in the 1960’s, the plot as it unfolds feels very relevant to modern times. Clocking in at a length of just under two hours, it is briskly paced as Dr. Love gets embroiled in an adventure that was far more than he bargained for. I was engrossed the entire time I was listening and I highly recommend it as a way to scratch that spy itch as the world waits for No Time To Die. Please, George, we know James Bond will return. Here’s hoping you do, too.

Passport to Oblivion (2-disc audio set) will be released 29 November 2019.

You can preorder it here.