Home > Features > Review: Double or Nothing by Kim Sherwood

Review: Double or Nothing by Kim Sherwood

James Bond is missing in action in the latest novel from Ian Fleming Publications. 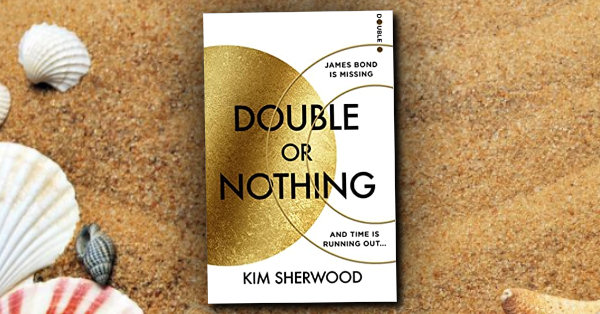 Double or Nothing is the first in a trilogy of novels focusing on the Double-O Section in which James Bond has vanished while on assignment.

It makes sense for Ian Fleming Publications (IFP) to try and establish a new series set in James Bond’s world as they are fast approaching a problem. Until now IFP has relied on the dual income streams of republishing Ian Fleming’s books as well as commissioning new novels by other authors.

The continuation novels have done well enough, but they have never reached the huge popularity of Fleming’s original books. And they are eclipsed by the film series which continues to be phenomenally successful even after 60 years. Given that James Bond’s origins and literary rather than cinematic that must sting a little.

But IFP’s problem is this. In most territories the works on which they rely for their earnings will come out of copyright. 2034 will mark the 70th anniversary of Ian Fleming’s death and so both his writing and the character will fall into the public domain the following year. Anyone will be able to write their own James Bond novel. Anyone will be able to republish one of the Fleming’s books.

Indeed, this has already happened in some territories with shorter periods of copyright protection. Most notable is Canada, where James Bond fell into the public domain after 50 years. All Fleming’s books except Thunderball are available to download for free for Project Gutenberg. Unauthorised James Bond stories appeared on Amazon Canada.

Thunderball is the exception as the novel was based on a screen treatment by Kevin McClory and Jack Whittingham. As Whittingham died in 1972 and McClory in 2006 copyright protection in Canada therefore extends until 50 years after the death of the Kevin McClory.

In short, IFP’s goose will soon stop laying its golden eggs. Something else needs to be in place to ensure continued earnings from James Bond. That must be frustrating. But – let’s face it – for years they have been relying on someone else’s hard work and talent for income.

As a result it seems like they have made a decision to create a series of James Bond books with James Bond at the periphery.

The author, Kim Sherwood, is someone I was unfamiliar with but her writing is fast paced and she throws you right into the action from the start. While James Bond is MIA he looms in the background and there are many familiar elements and characters throughout the book.

Double or Nothing revolves around the very current worry of climate change. The plot centres around tech billionaire, Sir Bertram Paradise, who claims he can reverse climate change by cloud seeding using his specially equipped yacht. But is he all that he appears and what is his relationship with the mysterious Rattenfänger organisation?

There are a whole host of characters, both from previous Bond books and new Double-O agents. Reflecting the modern world these characters are a much more diverse bunch than those appearing in Ian Fleming’s works. Most of the time they work perfectly well, at times it feels a little forced.

The main characters are Double-O agents Johanna Harwood, Sid Bashir and Joseph Dryden but there are plenty more. Some have familiar names that leap out of the page while reading.

That’s a little distracting while reading and, for me at least, made it clear that the direction the story seemed to be leading at one point was a bluff. Harwood and Bashir are both strong, well written characters. On the other hand Sir Bertram seems like a cartoon character and I just don’t buy Dryden. And one returning character doesn’t quite make sense with the supposed continuity from Fleming’s books. Half way through the book I almost stopped reading as I was confused by this lack of consistency in characterisation. And for a moment I wondered if this really was the work of a single author.

It’s when the action gets going that I really liked this book. It’s fast paced with exciting action and the weaponry seems realistic, while the quantum computers place the book in the future. While Sir Bertram’s cloud seeding ship may sound fantastic, it is based on a real idea to cool the atmosphere. Maybe a detailed explanation of how cloud seeding works would have made it seem more plausible than it actually does. It’s the kind of detail that Fleming would have included.

Double or Nothing isn’t set in the cinematic Bond universe but it has been influenced by it, sometimes to deliberately mislead. The whole James Bond universe has been time-shifted from the original mid-20th century setting to the near future rather than present day. And while it would be a stretch to consider Double or Nothing to be cyberpunk, Dryden has a gadget that reminds me of something from William Gibson.

The time-shift creates some problems of logic though. The events of The Living Daylights are referred to but make no sense if they happened without Berlin divided by a wall, as it was during the Cold War.

One of my dislikes about the continuation novels is that the authors put too many of Bond’s habits and preferences on the page.  What Fleming shared about his creation over the course of 14 books get crammed into a single novel.

Without Bond front and centre Sherwood avoids this problem and she certainly knows the James Bond universe well. But there are too many call-backs to Fleming’s novels and returning characters for my liking. And one particular niggle; a Vesper and a vodka martini are two distinct drinks.

When the book was first announced I was unclear who it was really aimed at. My feeling was the target audience was young adult. When I started reading my review copy it was clear that impression was wrong. But I’m still not clear who it was written for.

Many Bond fans will be interested in the concept of a James Bond spin off novel out of curiosity. But IFP needs a much wider readership than hardcore fans. And I wonder if the book would actually have been better if it had been written outside the Bond universe.

Double or Nothing is published in the UK by Harper Collins on 1st September 2022. In the US it will be published by William Morrow on 11th April 2023.

2 Responses to “Review: Double or Nothing by Kim Sherwood”