Jof Gurd reports on last night’s premiere of No Time to Die. 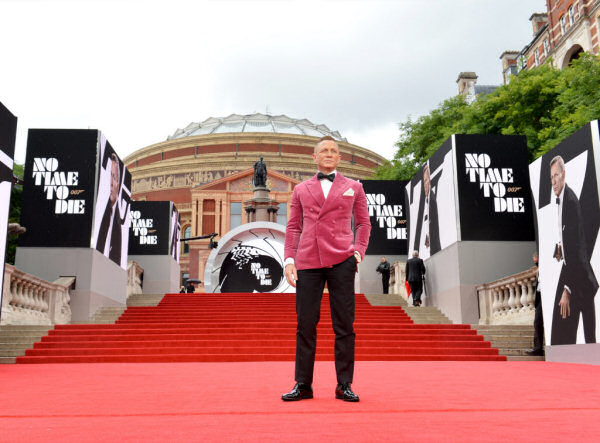 It all came down to this: a rainswept evening at the Royal Albert Hall as a new James Bond film, Daniel Craig’s last, was finally revealed to audiences after a tortuous journey beset by behind-the-scenes indecision, changes of personnel, on-set injury and, of course, delays imposed by the global pandemic which has upended life in so many ways and is still causing so much heartache and disruption.

The queue stretching right around the building filled the air with a real sense of elation at an opportunity to dress up, socialise and enjoy a slice of normal life again, barely tempered by the need to provide proof of a recent negative coronavirus test as part of the Royal Albert Hall’s reassuringly thorough mitigation and security measures.

The organisers’ aim was to shepherd the audience into and off the red carpet in half an hour: by quite some margin, they did not succeed. Beyond a gun-barrel portal, every corner presented another photo opportunity as the crowd took advantage of a break in the weather to pose with various renditions of the film’s title, an enormous sculpture of the 007 logo and the obligatory, battled-damaged, Aston Martin DB5.

At the same time, members of cast and crew were arriving to be show off their outfits and share their thoughts in the last minutes before their film was shared with the world, their interviews relayed through speakers at the venue and across the Internet. Bold fashion choices were on display, with Lashana Lynch’s canary yellow strapless frock and Phoebe Waller-Bridge’s sequinned jumpsuit particularly drawing admiring comment.

But it was the arrival of the man himself, Daniel Craig, that saw a surge to the red carpet’s centre stage as attendees sought to capture their own slice of his final hours as James Bond. Tanned and relaxed in a stunning red velvet dinner jacket, Craig came across as a man at peace with the adulation that accompanies the role, proud of the job he’s done and at ease with moving on.

Inside the auditorium itself, which a mere fortnight ago rang out with the pomp and circumstance of the Last Night Of The Proms, the 007 logo projected onto the ceiling-mounted mushrooms was a nice touch which probably still did little to aid their battle with the hall’s notorious acoustics. The sense of occasion mounted with the arrival of the royal party, their easy conversation with the cast and crew projected on the screen as the last few audience members found their seats, only to be upstanding as the royal party took their own to a fanfare from the Band of Her Majesty’s Royal Marines Portsmouth.

Producers Barbara Broccoli and Michael G Wilson took the stage, Wilson first taking time to acknowledge the false starts that contributed to the wait for a new Bond film before thanking MGM and Universal Pictures for ensuring that No Time To Die was being released cinematically rather than being streamed: this sentiment would be echoed by later speakers.

Similarly recurring would be the tribute Wilson paid to frontline workers and healthcare professionals for their dedication and sacrifice during the coronavirus crisis, some of whom were present as invited guests. Wilson was also able to announce that the premiere had raised more than £1 million for charities supporting members of British Special Forces and intelligences agencies both former and serving, a new record sum.

As Wilson concluded his remarks, Broccoli stepped in to pay tribute to the man she called “an amazing producing partner and fabulous brother” in a touching reminder that this franchise is a family business, underlined by their father Cubby’s Rolls-Royce on display just outside the venue.

After expressing how “honoured and humbled” he felt to be bringing the 25th Bond film to the big screen, it fell to director Cary Joji Fukunaga to bring the cast to the stage with a display of infectious energy and camaraderie, clearly appreciating the audience’s enthusiasm. “Did we forget someone?” he joked, before finally calling on Daniel Craig to take his place and say his piece.

Craig is both generous and modest, and among his thanks to everyone who had made the evening, the film, this journey possible and so special, still he marvelled at it all. Over these last 15 years we’ve seen just how intensely aware Craig is of the responsibility that comes with being James Bond, and here he stood for the last time publicly expressing his thanks to those who entrusted him with that responsibility, the words tumbling from him under the enormity of its weight lifting.

As he dedicated the film to frontline workers, there was a catch in his voice: the same catch from his speech to the cast and crew after wrapping the final shot of No Time To Die, the same sense of emotions threatening to overwhelm him at any moment. He paused to collect himself and offered one more word, his last as James Bond.

Jof Gurd was formerly the Bond correspondent for Birth.Movies.Death and can be found on Twitter at @tweetbyjof.