After starting their association with 007 in Skyfall the company must have been laughing all the way to the bank when they saw Craig wearing their charcoal mock turtleneck on the SPECTRE teaser poster. It was as much an advert for N Peal as it was for the film. 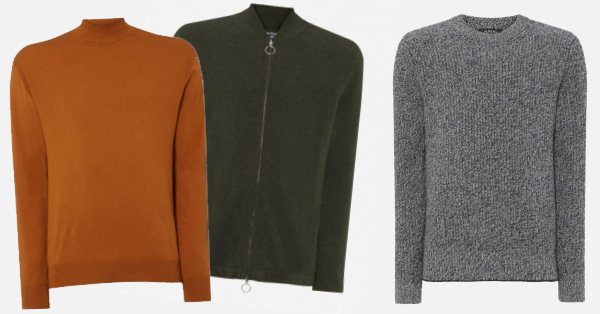 Recently the company unveiled its new 007 Cashmere Collection in London and New York to a number of 007 taste makers.

Although invited, I didn’t attend, and my initial impression of the collection was of disbelief.

More on that below.

A video, released last Friday and with music by David Arnold, previewed the collection but today N Peal’s 007 Cashmere Collection is finally launched:

The collection includes 24 items and will be available from N Peal stores and online in limited quantities.

N Peal began its relationship with the world’s most famous secret agent in 2012 on the movie Skyfall with a blue wave round neck knit for 007. Subsequently N Peal was asked to create two knits which were worn by Bond in the 2015 movie SPECTRE – a cable knit roll neck, and a superfine mock neck in charcoal which also featured on the SPECTRE teaser poster worldwide.

The first outfit I saw was an orange sweater worn under a “heather bark” brown cashmere “bomber jacket” inspired by an outfit worn by George Lazenby in On Her Majesty’s Secret Service. It’s a particularly unflattering combination and the brown isn’t even close to being the right shade.

On The Suits of James Bond Matt Spaiser includes the outfit in an article titled James Bond’s Worst Outfits (and How They Could Have Been Improved) . According to him it “looks horribly dated today, and the warm colours do no favours to Lazenby’s cool complexion” – so it’s not just me.

Some other weird choices include a Milano knitted grey waistcoat and navy jacket inspired by a scene from Goldfinger. It just doesn’t work at all.

However, most of the collection comprises sweaters inspired those worn by Bond in the films rather than interpretations of other clothing. With the exception of that OHMSS orange sweater these all work well. It’s easy to imagine wearing the chunky grey marl sweater in the winter.

Until you see the price.

A couple of interpretations that do work are a waistcoat inspired by the quilted gilet worn by Roger Moore in For Your Eyes Only. The long and short sleeved polo shirts also look good but there are just so many 007 polo shirts. While I love polos, enough is enough.

All in all a bit of a mixed bag, but if you’ve got some cash to splash and want to keep warm this winter then there are some luxurious items that you might want to add to your wardrobe.