Home > Features > License to Dine: Can 007 Continue to Dine Well?

License to Dine: Can 007 Continue to Dine Well?

Martin Stanley and Thomas Weiss examine Bond’s ability to eat well by comparing restaurants from the novels to his salary. 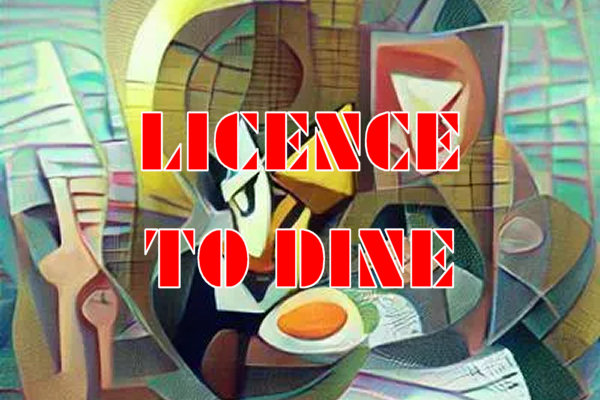 Ian Fleming’s James Bond was a renowned secret agent with a taste for fine living. When promoted to Double O status in the early 1950s, Bond realized how well off he had become with a salary increase and a more generous expense account. As he put it, “A licence to kill, it seemed, also came with an almost unlimited licence to spend.” And spend he did, especially on fine dining. But can he still afford that lifestyle? Or, must MI6 pick up more and more of the tab?

Bond is famous in both books and movies for his expensive tastes in clothes, cigarettes, cars, and women. It is less well-known that he dined often and very well. He did not do so in the movies; the latest film could have been titled, ‘no time to dine’. In every novel, however, whether written by Ian Fleming or one of his successors, he dined frequently in all sorts of places, including top-end restaurants. The novels record over 500 dining experiences, roughly 12 times per novel or once every 21 pages.  There are over 100 identifiable restaurants, two-thirds of which are still in operation, or were so before the pandemic of 2020.  In both France and the UK there are 23 restaurants identified by name, most of which have been included in the Michelin Red Guides at one time or another. Many have survived for a very long time and continue to be included in the Michelin Guides, along with a listing of the price of a typical meal. A time series of these meal prices has been compiled from 1953, the year the Bond series of books began with Casino Royale, until 2019.

Dinner at restaurants with Michelin stars, especially three stars, now seems to require a small mortgage, but this was not always the case. In 1953, the meal price, including wine, tax and service, averaged 21.7 FFs, £2.20 or $3.40. Even at the top restaurants prices were not sky high, averaging only 24 FFs, £2.50 or $3.85 at three restaurants – Grand Vefour, Lucas Carton, and Oustau de Baumaniere – that held 2 or 3 stars in almost every year from 1953 to 2019.

Bond could have afforded to dine at these sorts of restaurants in his day. His salary, first mentioned in Moonraker, was said to be £1,500 ($2,280) a figure equal to that of a Principal Officer in the Civil Service, and well above the average annual earnings of £434 ($660) in the UK at the time. Had Bond dined at one of those three-starred restaurants once each week for the year, his expenditure would have totaled £130 ($200); if he dined instead at a broader range of restaurants, he would have spent about £114 ($177).  Bond could have dined very well and spent between 7.6 and 8.7 percent of his salary. Of course, he was not likely to dine alone; Bond girls also had to eat, so those percentages would be double. Still, it is plausible that he could have afforded to dine out regularly with a companion in the 1950s.

French restaurant prices, however, rose noticeably even in the early years of Bond’s career, 1953-67, when Ian Fleming was writing. Prices subsequently more than doubled before 1981, when John Gardner began writing the novels, and continued to increase at 6 percent annually until the start of the Euro period in 2002. In the Euro period, prices rose modestly at only 2.5 percent per year, but the Pound had depreciated relative to the Euro, so Bond, or his successor, would have seen prices rise by nearly 7 percent per year, to £172 ($260) in 2019.  Overall, from 1953 to 2019, the price expressed in British Pounds rose at 6.6 percent at current exchange rates. This increase was faster than the French CPI, which rose at 4.2 percent per year, and the Retail Price Index for the UK, which rose at 5.2 percent. Restaurant dining was becoming more and more expensive relative to other goods and services.

How did Bond’s salary fare in comparison?  As a Principal Officer in the Civil Service, which today would be grade G7, his salary would have increased on average at only 5.4 percent per year from 1953 to 2019, not quite as fast prices. But he could have dined very well for much of his career. If the 1953 expenditure share of 15 percent of his salary to dine weekly with a companion is used as a gauge, then Double O agents could have lived in that manner for the remainder of the 20th century. After the Euro arrived in France in 2002, however, Bond would struggle to maintain that lifestyle. The average restaurant price rose by 46 percent between the late-1990s and the mid-2010s, while Bond’s salary increased only 29 percent. On top of that, the Pound fell considerably relative to the Euro so that at current exchange rates, Bond would have had to spend a whopping 34 percent of his pound-denominated salary in 2019.

In the face of the deteriorating exchange rate, Bond might have shifted his consumption to the burgeoning domestic restaurant scene. Even there, however, he would have to contend with inflation. Prices in the nine UK restaurants on Bond’s list, places such as Le Caprice, Scott’s, and the Grill at the Savoy, rose faster than restaurant prices in France from 1976 to 2019.

The upshot is that there have been two distinct periods, and perhaps a problematic future. Before the Euro, dinner for two each week at a sample of French restaurants was not out of the question, especially so in the Fleming era when the cost would have amounted to only 15 percent of his salary. The trend, however, has been deteriorating noticeably since the inception of the Euro, and in 2019 it would have cost Bond a third of his income. More worrisome is if the upward trend continues. In that case, would the next 007, attempt to maintain such an extravagant life style? Who would pay for it? Would MI6 raise the salary, cover more of the lavish expenses, or take the chance that 007 would not pile up large debts that could pose a security risk? Perhaps in the #MeToo age Bond and companion will have to go Dutch, each paying their own way. Whichever the case, one can hope that the literary Bond would continue to dine as well as possible, and not suffer the fate of his cinematic counterpart who seems to have no time to dine.

Martin Stanley (@ukcivilservant) was a senior civil servant in the UK government and now teaches and writes about good government, and is the keeper of the website about all things that have to do with the British civil service.

Tom Weiss is a retired economics professor interested in the economic history of tourism and the dining history of James Bond.

One Response to “License to Dine: Can 007 Continue to Dine Well?”