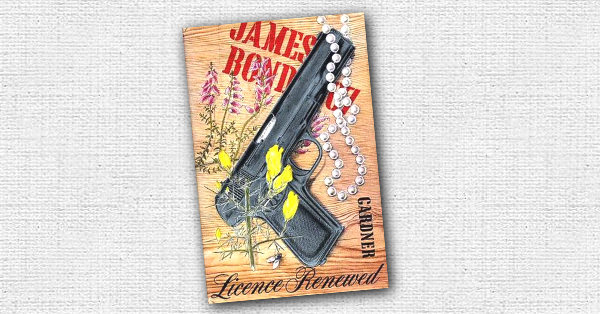 It is clear at the start of Licence Renewed that time has passed and we now find ourselves in the 1980s. Q is very much present behind the scenes and we meet some new characters as well as the usual suspects.

The opening chapter was very much a 1960s style plot of disguises and deception where the reader is introduced to a man whose identity is only later revealed. This chameleon-like individual changes identity in order to travel from Dublin to London undetected, triggering many questions and inviting the reader’s mind to speculate and entice them to continue reading on.

Bond then makes his appearance arriving from a picturesque cottage and being given the typical mission briefing. His objective is to get close to the nuclear physicist Anton Murik, also known as the Lord of Mulcardy, find out what he is planning and stop him.

Both Bond and the reader are given a background information on Murik and how he was ‘let go’. Here the reader also discovers the identity of the unknown man, Franco, a terrorist aiding Murik in his plans to create a nuclear disaster.

It did make me smile when I went onto the next chapter, where Bond ends up ‘running into’ Murik at Ascot race course, one of the oldest and considered gentlemanly sporting events on the racing calendar.

Here the reader is also introduced to Murik’s assistant and mistress ,Mary Jane Mashkin, a cold and stern woman, and his ward Lavender “Dilly” Peacock. At first Dilly appears timid, scared and weak. However, this perception is later reversed when she demonstrates that she is resourceful, brave and reliable in aiding Bond when help is required.

After ingratiating himself with Murik and angling an invite to Murcaldy castle the reader gets a sense that Bond is happy about this; having the opportunity to visit his native home, Scotland, a place close to his heart.

Passing through a picturesque village and arriving at the castle, Gardner gives a great deal of detail on the contents and setting as well as the vast collection of weapons housed in the various rooms, emphasising the wealth and status of Murik

It could be that Murik is either an avid collector of his ‘family’s’ history and heritage. Or that he was paranoid in expecting an imminent attack, although this was somewhat relaxed later when Murik discloses information to Bond on his plans, and Bond making mental notes. This being on guard is something Bond never lets waver, even when Mashkin tries to seduce him – and fails spectacularly.

The Lord of Murcaldy’s champion challenge was definitely a test of brains versus brawns, and Bond using the former manages to defeat the challenger, Caber. Reading a description of Caber conjectures up a burly Scotsman built like a brick wall.

It could be argued that Murik chose Bond to fight Caber not because of it being a traditional event – wanting to see what Bond, as a mercenary, is made of – but because of the sadistic strike he possesses. With Bond winning, Murik decides that Bond is the man to be offered a contract – to kill Franco and at the same time walk away a wealthy man.

Reading further, the events described by Gardner on Bond’s escape and how the people living near the castle were very much on team Murik. Whether this was due to bribes, being brainwashed or genuine loyalty, the escape scenes mirrored something that that you might find in a 1970’s Hammer horror film, such as The Wicker Man.

One thing that the reader discovers about Murik is that he enjoys monologing his plan to Bond, though only to a point so as not to give too much information away.

Arriving in Perpignan the reader is made to feel like they are really in the country, especially when Gardner describes the runner bringing the flaming torch to light the bonfires and the atmosphere being that of a party, or an Olympic event that included the whole community – similar to the events at Murcaldy castle and all the people playing a part in the festivities.

Here, the reader gets a sense that this moment made Bond forget that he was on a mission whilst waiting for the climactic moment of the bonfires being lit and then returning to the reality of the here and now.

Despite getting away, and making brief contact with MI6, Bond is temporarily apprehended, escapes and hurries over to save Lavender from being killed. One could ask if Gardner deliberately used the setting of a French fashion house as a location in the book – France being renowned for showcasing such creations.

Despite saving Lavender (Mashkin being killed by mistake) and stopping Franco, Bond ironically fulfilled his contract with Murik – minus the  £50,000 – but also to M. Half a mission completed, Bond is apprehended and no chances are taken.

After being captured Bond endures another monologue, with Murik informing him of the cover-up of Mashkin’s death while expressing his grief. He refers to Bond’s double-O status and describes events that are yet to come; Bond’s death. But Bond rattles Murik when telling him he knows that Murik is a fraud and not the true heir of Murcaldy.

As events unfold, the reader gets the sense that Bond, along with Lavender, is in a complete bind and cannot escape. Then, in the style of MacGyver, Bond manages to shift the odds.

Battling henchmen Caber for a second time and saving the day, Bond style, all seems right with the world. That is until Murik escapes.

With the aid of Tanner after ‘(un)official’ approval from M, Bond undertakes the task of stopping Murik. Thinking ahead and taking advantage of the plethora of weapons, Bond does not want to leave anything to chance in letting Murik escape and destroying the proof about the rightful heir to Murcaldy.

The final pages of the novel, made me reminisce about Casino Royale when Bond took Vesper to the hotel. Here it is a break to the Riviera with Lavender, giving Bond the chance to forget even for a short time that he works for Queen and Country.

A couple of lines from the film The Spy Who Loved Me sum it up perfectly:

One Response to “Licence Renewed: a review”