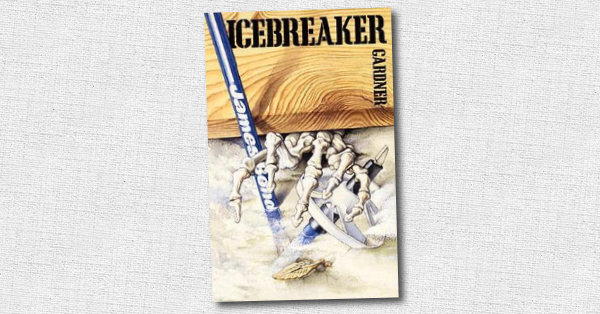 The first thing I noticed when opening the next novel in the series is how small the text is compared to the others.

“What gives?” I wondered. “Why have you made this change?”

Granted, had no problem reading the novel from start to finish. I was just conscious of those poor souls who wish to borrow the book from me and need to resort to using a magnifying glass.

Besides that, the reader is thrown head first into another situation in the style to that of what the reader experienced with For Special Services.

Location and situation established – unidentifiable individuals who have committed an act of murder against people of various nationalities – and of course many questions go round. Who? What? Why?

I can only guess that Gardner did this to again keep the reader’s interested piqued and eager to read more. Well, it worked for me.

Here Gardner decides to explore the idea of neo-Nazism exploding across the globe and the creation of a fourth Reich. Bond is tasked with not only stopping this threat from becoming a reality but also working with other agencies. They’re a mixed bag of Russian, Israeli and American agents.

It’s all very Game of Thrones with each agent having their own agenda and modus operandi.

I found it interesting how Gardner dedicated chapter to each agent, making the reader play detective as to who could be trusted and who was the double crosser. These include the Israeli MOSSAD agent, Rivke. She is the daughter of a former SS officer and Bond and the reader question whether she is genuine – or a bloody good liar.

It was no major surprise to learn how Russian agent Kolya, is linked to what was once SMERSH and linking back to Fleming’s masterpieces. But you are kept on your toes and confused by CIA agent Tirpitz. Whose side he is on?

Though not given her own chapter, Vacker is an enigma as the reader only has a vague sketch of her character at first.

Bond is always on his guard before and during the Icebreaker mission. Despite being warned what is in store for him he is captured and comes face to face with the villain of the story, Nazi war criminal Aarne Tudeer under the alias Von Glöda.

I did smile at the name Tudeer as it made me wonder if Gardner was trying to add a little bit of Fleming to the book.

Despite being captured, subjected the typical villain’s monologue and tortured using a sub-zero ice bath during interrogation, Bond still proves that he is not an easy nut to crack.

Discovering that Paula Vacker was actually one of the good guys was a surprise, and also a bonus for the tables to be turned in Bond’s favour. I admit I was a little disappointed that there were not a great deal of pages that focused on Bond defeating Von Glöda, there seemed to be more with the Kolya.

I admit an instant comparison came to mind with regard to Von Glöda proclaiming himself the new Führer. Hitler had his Wolf’s Lair while Von Glöda had his Ice Palace in Helsinki.

Before I got to the end of this novel my heart sank. Until I got to chapter 19 I thought it was going to be a disappointing ending. There is some action, just enough for Bond to come out on top while being injured in the line of duty.

I was surprised when Gardner bought M over to Helsinki as he is always in the confines of the building overlooking Regent’s Park.

So, a lot of mistrust, back-stabbing, and true colours revealed. There are a few twists and turns along the way and maybe a little confusion here and there.

Not as much energy and fight as I thought there would be with the novel titled ‘Icebreaker’, but still a good read.

Now on to the next mission, once rest and recovered of course.