For Special Services: a review 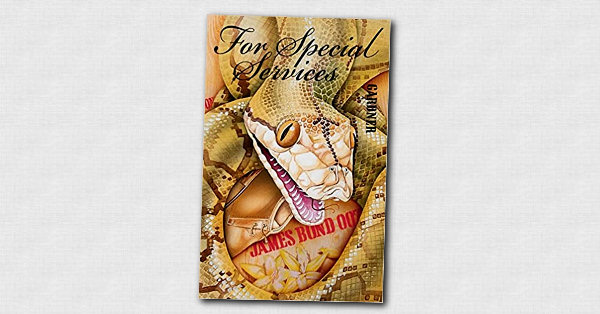 The first chapter in For Special Services is just two pages long and, much like Licence Renewed, the novel starts with planes, airports and flights.

Air traffic controller Frank Kennen, and to some extent the reader, is thrown into the deep end with a worrying situation; the radar displaying three red zeros, the signal for a hijack. After 95 tense seconds without any response from the plane Kennen finally receives the all clear from the captain. The emergency has been resolved thanks to Britain’s top spy.

We then learn that Bond was on the flight and expecting trouble. Flight BA12 has been infiltrated by hijackers. Bond is assisted by a number of members of the SAS who incapacitate the culprits.

Then from high up in the air right back down to terra Earth, the reader finds themselves in the swamps of Mississippi, a derelict house whose interiors reflected an enormous contrast and meeting members of the newly revived SPECTRE.

A discussion of the foiled hijacking is followed by ‘Actions to be taken’ – eliminating the man who failed in his objective. The method used by SPECTRE, using a Python to crush and then devour the man, isn’t something that surprises the reader. It makes a statement and reminds everyone that the organisation will not tolerate failure.

Death over, the meeting swiftly moves on to SPECTRE’s new mission. The objective of Operation Hound is to gain control of the US satellite network. A secondary objective is to kill Bond.

Back in London, Bond is briefed by M and meets Felix Leiter’s daughter, Cedar. Here we learn some background details about Cedar and her role in the CIA. We also learn the organisation has recently been observing the activities of a rare print collector named Markus Bismarquer and, the proverbial thorn in Bond’s side, SPECTRE.

They hatch a plan for Bond to pose as an art expert with Cedar as his wife. Upon reading the chapter here a parallel could be drawn to Fleming’s On Her Majesty’s Secret Service in which Bond played Sir Hilary Bray researching the Blofeld family tree. Now he is Professor Penbrunner specialising in rare prints, based on someone Bond knew from his school days.

After arriving in America to meet Bismarquer, Bond and Cedar are ambushed at their hotel. After escaping they check into another establishment, hoping to evade capture. When luck fails they find themselves in situation straight from a Mission: Impossible script. But after being trapped in a lift they manage to escape without serious harm.

As they head off on their road trip to the Bismarquer estate Bond phones Bismarquer to tell him he would be negotiating on behalf of Penbrunner. When they arrive at the ranch they find something more like a small town from Gardner’s detailed description.

Here a number of new characters are introduced, such as Bismarquer’s assistant, Walter Luxor. He conjures up something of the image of the demonic Gentlemen from Buffy the Vampire Slayer.

Despite his appearance being somewhat off-putting, Gardner leads Bond and the reader to reach the same question:  is Luxor actually Blofeld in disguise?

Bismarquer reminds me in some ways of Auric Goldfinger. His love of gold compares to Bismarquer’s love of prints, ice cream and a passion for objects. The pursuits of both border on obsession. And inside the great estate Bismarquer has built a replica of the house from Gone with the Wind. Was this a favourite film of Gardner’s for him to inject his character with such a peculiar interest?

Whilst touring the ranch Bismarquer’s wife, Nena, approaches Bond seeking his help. She realises that both the prints and the man who supposedly created them are forgeries. She shows Bond a secret chamber with tunnels leading to the main building. Though brave to show Bond this hidden secret, she maintains leverage over him by threatening to blow Bond’s cover if he reveals what he has been shown.

It’s still debatable at this point in the novel as to whether or not she can be trusted, or even if she is might actually be Blofeld. It’s like a murder mystery with so many suspects and so many possibilities.

Soon their host drops the smiles and laughter as Bond and Cedar discover what Bismarquer is up to – hypnotic control. The use of poisonous ants to get rid of them is straight from the pages of Dr No, when the centipede was used in attempt on Bond’s life. Using a DIY bomb to escape the ants allowed Bond to show he is a man not to be messed with and unfazed by their tricks.

Here Gardner introduces another challenge for Bond. Whereas in Licence Renewed Bond had to fight, here it is a test of skill and wit as he must race Luxor at high speed over ten laps. Bond has his work cut out going round a track that Luxor has plenty of experience on while formulating a plan to try and stay alive.

And of course, the element of cheating is never far away; a fire bomb falling ‘accidentally’ on to the track from the Shelby-American. At the end of the race Bismarquer tells Bond that they need to leave in the morning because of a number of guests arriving for a motor vehicle conference. Bond’s mind goes into action.

Before leaving Bond Nena, who we discover is not so perfect in appearance. Here Bond learns more of what is happening at the conference among other surprises.

Despite learning about SPECTRE’s plan control of the satellite network (very much like controlling the satellite in You Only Live Twice), and formulating a plan with Cedar, Bond is captured. The use of knock-out gas is straight from spy film of the 60s or 70s.

With Bond apparently under the hypnotic control of SPECTRE he seems to be working against the interests of the United States. However, it turns out he had been given the antidote. It’s all a bit too convenient.

The reveal is that not only does the Blofeld bloodline still exist, but who has taken over the family business from Bond’s former nemesis. No gasps from me I’m afraid when it was revealed.

The fight scene in this part of the novel did disappoint me a little. In Fleming’s books Bond’s battles with Blofeld were big fights. Here the new Blofeld is revealed and dies after what seems like 30 seconds although it did make me smile that the story came full circle with the python.

Although I enjoyed reading Gardner’s second book in the series, I did find that some of the characters didn’t have much of a background story. As a result they seemed a little all over the place. Also, there were moments where certain events were too rushed to really know what happened.