In the last of this three part series Kathryn Smith shares her thoughts and impressions of Ian Fleming’s final 007 books. 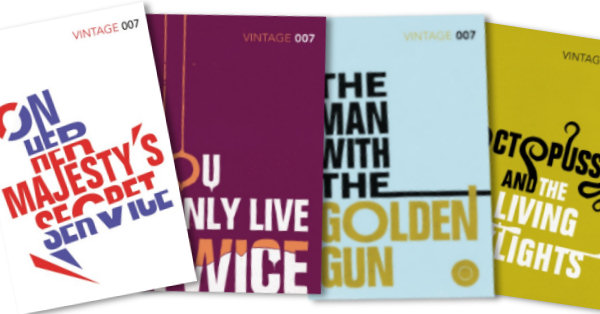 I really did enjoy this book and found that it was very close to the film adaptation. There were still a few things mentioned in the book that were not in the film, such as Bond informing the government about the girls’ treatments and finding out about their different backgrounds. One of them hated chickens but because her family had a chicken farm she was in a position to ruin the poultry industry.

Although portrayed in the film, the last chapter where Teresa was murdered on her wedding day was just as powerful as when acted out by George Lazenby and Diana Rigg.

Like the ending of the film, I felt sorry and sad for Bond that he had finally found happiness and then it was stolen from him by Blofeld and Irma Bunt.

In fact in both On Her Majesty’s Secret Service and Casino Royale Bond has found love and, as a result of his line of work, has had it stolen from him.

I enjoyed this novel for two main reasons, the first being that it focused on Bond’s goal to find Blofeld after killing Teresa.

And although Bond is depicted by Fleming as a cold-hearted killer he also found love again time only for it to be taken from him yet again. My mind instantly jumped back to Casino Royale when Bond fell in love Vesper. SPECTRE seems intent on stopping Bond from finding happiness.

Despite the loss hitting him hard, as the novel progressed it felt very much like ‘keep calm and carry on’ with Bond given the task of negotiating with Tiger for the UK access Russian cipher traffic intercepted by the Japanese.

The castle of death was a huge contrast to Blofeld’s volcano hideout from the film complete with a  space rocket and lauchpad. America was still working to put man on the moon at the time Bond was shot.

Reading about the Garden of Death, made me instantly think about the Poison Garden located in Alnwick, and I wondered if Fleming drew inspiration from that. While the film was reflecting the times I felt that Fleming was exploring creative ways for Bond to defeat Blofeld, the obstacles he would need to dodge and adding a bit of ‘Mission Impossible’ into the mix.

And Kissy Suzuki, was not portrayed as the typical cliché Bond girl from previous books – pretty, growing up in a first world environment with heating, lighting and modern conveniences. When reading about her character, it immediately made me think back to when Honey Ryder was introduced in Dr No and how much of a literary ‘Bond sister’ she could have been to Kissy.

Fleming was introducing women from different backgrounds and walks of life rather than writing only about girls in fast cars with nice clothes who are easily scared.

To me, Honey Ryder and Kissy Suzuki are true Bond girls as they are able to provide Bond with both intellectual and physical assistance.

When reading the final chapter, I felt sorry for both Bond and Kissy – she had found love with Bond and was pregnant by him, and with Bond suffering from amnesia, he did not have the stresses and worries that he had had to previously endure.

That is until he read the word Vladivostok. Triggering some vague memories, he left Kissy and their unborn child behind as he headed for Russia.

The Man with the Golden Gun

This is another one of Fleming’s novels that surprised in more ways than one. The beginning really got my attention with Bond disappearing for a year, only to come back brainwashed by the Russians to kill M.

Although considered an act of treason, M decides after Bond’s rehabilitation to throw Bond in at the deep end to go and kill Scaramanga. This is one of a number of Fleming’s books that are set in Jamaica, which is not a huge surprise with him having his Caribbean home, Goldeneye, where he would escape each winter and write about Britain’s top secret agent. And yet Jamaica doesn’t feature in the film.

It is interesting that in the book Scaramanga doesn’t know who Bond is and what he looks like, providing an opportunity for infiltration into Scaramanga’s inner circle. I also noted that Mary Goodnight’s character was not portrayed as the dizzy clueless agent of the film, but as a strong, efficient woman.

The events on the train seem more reminiscent of a Western than a spy novel. Scaramanga ties a shop mannequin to the track which Bond thinks is Mary Goodnight and reveals himself by trying to stop the train.

With Leiter’s assistance Bond turns the tables on Scaramanga and his Russian conspirators, signifying that in some way we always need the help of our American cousins.

Despite Bond having the upper hand after wounding Scaramanga , he still manages to attack Bond. All too often after seeming to be beaten villains have one more trick up their sleeves.

For me, On Her Majesty’s Secret Service, You Only Live Twice and The Man With The Golden Gun all link together nicely. It is a case of one mission completed then move on to the next.

Fleming definitely does not leave any loose ends or unanswered questions. But there are some

cliff hanger moments where it is very much a ‘you want to know what happens next, then read the next novel’.

Fleming’s final book is an interesting collection of short stories.

Minus the trips to India and Germany and the circus, Octopussy focuses on an ex-army officer and how Bond, as in the film, spared him humiliation by giving him 24 hours to choose an honourable death.

It is was interesting how Octopussy begins with an ordinary man going about his usual daily routine, only to have everything come crashing down like a house of cards when Bond arrives.

The story delves into the Dexter Smythe’s military past, his act of theft and murder, and how he tried to start a new life in Jamaica. Granted that this is not Bond’s usual type of mission it was interesting that he took on this task, as it was revealed the murdered man was not only an acquaintance, but also a father figure to Bond, making it a somewhat personal objective. Even after Smythe’s death, Bond out of some kind of respect, classifies it as an accident. Whether it was to protect Smythe’s military reputation or the service, who knows?

Once this tale ends, another begins and it is here that Fleming sets the scene for Bond whose levels of interest in work are waning. Well that is until Goodnight brightens up his day with M wanting to see him. Here Bond is given the task of going to one of Britain’s most prestigious auction houses, Sotheby’s, regarding The Property of a Lady.

We learn that when customs intercepted a parcel they discovered a hugely valuable Faberge egg destined a certain Maria Freudenstein. Both Bond and the reader are introduced to Dr Fanshawe, an expert in the field of Faberge , who relays the story to M and Bond and how it was supposedly part of Freudenstein’s inheritance.

Delving further it is revealed the a Freudenstein is not a double, but triple agent working for the soviets and tasked with sending false reports to the CIA whilst working in an admin role at MI6.

A plan is formed and Bond goes with Fanshawe to attend the auction that the egg will be a signature item in. From receiving approval from M, Bond is given a crash course in the world of auctioning and history of certain items before going to observe the bidding process.

Using a style that could be the equivalent of the tick tack men at racecourses, Bond tries to deduce from the prearranged signals who is in cahoots with the auctioneer and who is the main bidder on “The Property of a Lady”, as the egg is billed. Finally, the eagle-eyed Bond manages to identify the bidder and discovers that he is a Soviet agent, attached to the agriculture attaché.

This suspicion is confirmed further when he tails the agent and sees him enter the embassy. Satisfied and objective complete, Bond revels in the knowledge and pleasure of knowing that the spy will be a persona no grata. It is here that I feel that Fleming was not only enforcing the hostility between the Eat and the West but also using this story as a way of rubbing Russia’s nose with the fact that a British can outsmart the Russians. Whether it is a minor issue or a global incident, the British are always going to win.

Then moving into The Living Daylights and Bond’s mission to assist a fellow agent, 272, in escaping from East Berlin. Once again Fleming incorporates the Russian threat and constant attempts to strike at the British government through the secret service.

I find it interesting that very little is known about agent 272, making the story more about the mission than the person. Bond only knows that a Russian agent known as Trigger is tasked with killing agent 272 and he must prevent it.

During the timeframe that agent 272 is to escape near no man’s land, Bond notices the orchestra, especially the blonde cellist. When Bond realised that the blonde cellist is Trigger he seems to be taken by surprise. A female sniper may have been a new thing in the era this was written.

It could be argued that Bond not killing the sniper was Fleming’s way of highlighting to the reader that Bond has reached a point where he cannot carry on anymore, and ultimately wants out.

The final story was different for Fleming as much of it involves Bond thinking about New York and his enjoyment of scrambled eggs- something of which has featured a lot in the Bond books, with bacon and black coffee.

It struck me how Fleming actually included a recipe to make scrambled eggs perfectly whilst Bond is thinking about helping a former MI6 agent.