Ahead of the No Time to Die premiere, David T Smith looks at the Dirty Vodka Martini from SPECTRE. 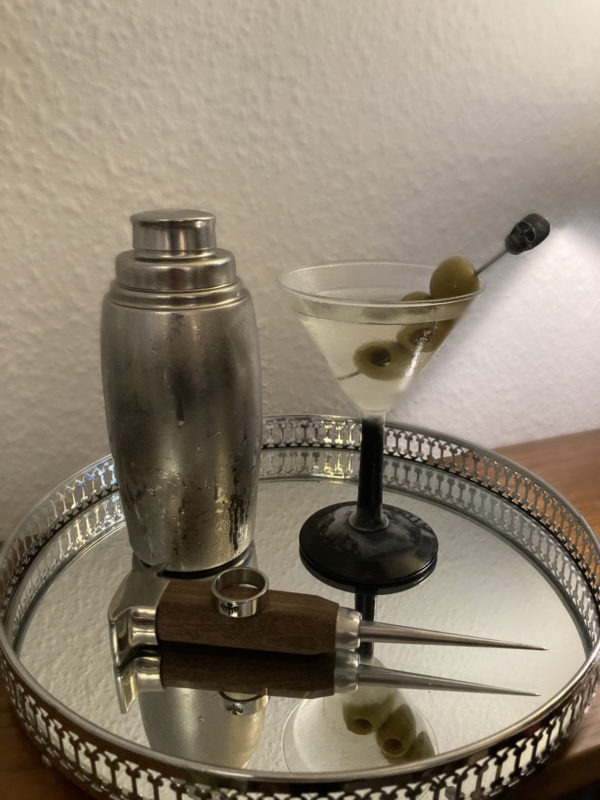 Along with many other 007 fans, I have been re-watching the series in preparation for the release of No Time To Die. As someone who (only slightly metaphysically) lives and breathes cocktails and distilling, I was intrigued by the choice of cocktail that Bond and Madeleine Swann enjoy in the palatial surroundings of the Desert Orient Express: “… a Vodka Martini – dirty”.

“Dirty” when it comes to a Martini signals the inclusion of muddled olives or olive brine in the mixing of the cocktail, in addition to the olive garnish.

The Dirty Martini is thought to have been invented in 1901 in New York by John E O’Connor, who is recorded as having served a Martini after having muddled an olive in the mixing vessel beforehand. Later, olive brine was added. The Martinis of the time would have been less dry, with many being equal parts gin and vermouth.

When it comes to the film (at the risk of looking into it too deeply), the drinks are clearly shaken and, from the look of them, they appear to have just had olive brine added; a drink made with muddled olives would be hazier in appearance. In reality, the Martinis used on set are usually just water.

It is clear that the drinks are shaken as we see the cocktail shaker, but this is also a practical choice: as the olive brine is oily, shaking is a more effective way to integrate the flavours than stirring.

Some viewers may have wondered why the bartender leaves the shaker on the tray (other than as a handy plot device for 007 to use to spot would-be assassins). From a drinks perspective, this is because there is likely some Martini left in the shaker; this is known as the “dividend” and is, in a way, a second drink. A dividend is sometimes kept in a small carafe in an ice bucket, but – more commonly – the shaker is simply left alongside the glasses. This was particularly popular in the USA in the 1960s and 1970s. House of Prime Rib, a restaurant up the road from A View to a Kill’s 3rd Street Bridge in San Francisco is an establishment that still serves the dividend for both its Martinis and Manhattans.

Bond and Madeleine’s drinks are each garnished with three olives. There seems to be some superstition in the drinks world regarding the use of an odd number of olives: one or three is typically seen to be fine, but never two or four (five and above being excessive). Incidentally, something similar is also seen with the use of espresso beans to garnish Espresso Martinis or sambuca.

The use of three olives for a garnish also has a more personal, Bond connection. In 2015, Roger Moore outlined his “perfect Martini” in an article for The Guardian. At this point, Sir Roger was no longer drinking Martinis for health reasons, but in his answer he suggested that, if you  have three olives and he happened to be with you, then he could have one of the olives and enjoy the “suspicion” of a Martini.

In the same article, he referred to the Dirty Martini as, “a dirty, filthy rotten Martini, and should not be drunk by anyone except condemned prisoners.”

The first volume will make two Martinis, plus dividend; use the second volume to make a single Martini.

Fine strain (i.e. through a clean tea strainer) into a pre-chilled cocktail glass.

The vodka of choice in SPECTRE was Belvedere, which is made from rye in Poland (coincidentally, the birthplace of Blofeld). In a Dirty Martini, the bready notes of the rye work well with the olives, giving the drink an amuse-bouche quality that is wholly appropriate for this scene, where it is ordered as an aperitif. Wheat vodkas such as Grey Goose, Finlandia, Absolut, Stolichnaya, or Smirnoff will produce a cleaner, crisper cocktail.

You may find that exotic base spirits, such as grape (e.g. Ciroc), somewhat clash with the olive, but that is just my opinion.

Whatever you choose, this drink is well worth exploring; as 007 would be the first to admit saving the world can sometimes be a “dirty” business.