After reading all Ian Fleming’s 007 adventures in 2019 Kathryn Smith started 2020 by delving into Colonel Sun. 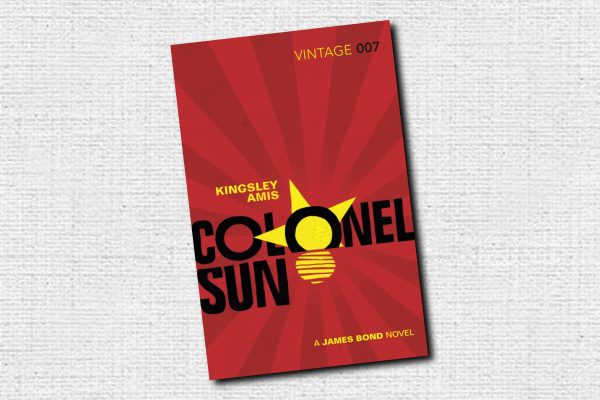 As I delved into the first chapter of the first 007 continuation novel Kingsley Amis (writing as Robert Markham) begins by having Bond reflect on how he is has no major assignments and that his life has become so routine.

It is interesting as many of us in our everyday lives fall into repetitive habits; some like this and others get easily bored and restless. You can detect that Bond is starting to fall into the latter of the two. It is re-enforced further when Bond expresses this to Tanner during a game of golf, whilst being watched from a distance by a henchman.

This is also a lesson to the reader as well, that getting into a routine means that you are not aware of what is going on around you, especially regarding your safety. Even though Bond sensed that he was being followed his senses were not as sharp as they would have been in the field.

But that is the calm before the storm and it is suddenly over when Bond arrives at M’s home. Bond is ambushed after finding M upstairs drugged and in a weakened state, and needs to escape before being drugged himself. Feeling a jab in his arm he eventually makes a break for it and hide in the grounds of M’s estate before passing out.

Awaking to discover his boss and the assailants gone, Bond informs Tanner. It is then that he learns that M’s butler, Chief Petty Officer Hammond, and his wife had been murdered.

Tanner and Bond are to go over everything that has happened and try and establish where M could have been taken. After being grilled by Scotland Yard and Sir Ranald Rideout, Bond heads to Greece to find M and stop the sinister plan that is to unfold – to massacre attendees of a secret conference on the Greek island of Vrakonisi. The British government would be blamed, with Bond and M as scapegoats, leading to international retaliations.

Whilst Bond is making preparations to rescue his boss, Amis cleverly introduces both the reader and M to the villain of the story, Colonel Sun. Although described as a calculated and ruthless military man, he seems to want to portray himself as a calm civilized ‘Englishman’. This contrasts with M, who does not hold back his distain by insulting Sun during their first meeting.

Travelling to Athens, Bond meets and saves a Greek woman named Ariadne, who the reader discovers is working for the Russians. It is nice to see that Amis continues Fleming’s style of depicting Bond girls in this novel. We see that Ariadne is strong, resourceful and doesn’t suffer fools easily. She is one difficult person to beat, even by a man.

Once all is revealed to Bond, he is taken to a location where upon he meets another spy, Ariadne’s boss, Gordienko. It could be argued that there is a hint of irony here as the East and West were rivals politically, economically and socially and yet two spies from different backgrounds agree to work together. This accord to work together is short-lived though as Gordienko is killed leaving  Bond and Ariadne on their own.

That is until Ariadne convinces an old friend named Litsas to help them after mentioning a certain Von Richter; Litsas has a score to settle.

Despite Sun’s henchmen being on their tail, Amis, like Fleming, shows Bond outsmarting his enemies using his wits and clever tactics.

Although time has been bought and a plan is conceived, Ariadne is unsuccessful in trying to convince Colonel-General Arenski of the KGB of what is going to happen. Instead Arenski clumsily decides to try and capture Bond. Suspecting a hidden agenda, Bond carries on with his mission regardless. But after reaching the hideout of Sun, where M is being held, Bond and the gang are captured.

Once face to face with the enemy, Sun takes despicable delight in torturing Bond with an array of instruments. Sun calls Luisa, one of two prostitutes introduced earlier in the book, to taunt Bond by stripping for him before he is finished off.

Although under orders and control of a sadist, Luisa’s bravery through her disgust at Sun’s actions provokes her to rebel and save Bond. Once free Bond locates M, Litsas and Ariadne, defeats the henchman and pursues his target.

I will admit this part of the novel somewhat parallels the scene in the film version of The Man With The Golden Gun where Bond had his final one-to-one stand-off against Scaramanga. Here is a similar set-up; the tables are yet again turned in what appears to be Bond’s favour, and the villain tries one last attempt to have the upper hand using a mortar bomb, but fails.

So, mission accomplished, villains defeated and all is right with the world again with peace, harmony and nations working together to maintain this. And of course, Bond receiving his usually hearty pat on the back for a job well done from the British government officials with the added summary of details he and the reader are not aware of.

Following one official thanks and congratulations, another arrives in the form of Mr Yermolov wishing to bestow on Bond the Order of the Red Banner. Despite being one of Russia’s highest honours Bond, of course, declines to accept for reasons that are crystal clear.

This also prevents Ariadne from accepting Bond’s offer to go to London with as they have the roles, orders and way of live to which they are both married and cannot change.

4 Responses to “Colonel Sun: review of the first 007 continuation novel”