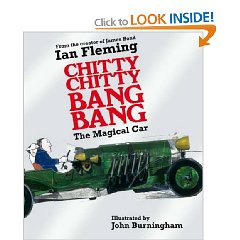 Chitty Chitty Bang Bang was written by Ian Fleming, author of the James Bond books, for his son Caspar.

Inspired by a series of racing cars built by Count Louis Zborowski in the 1920s powered by aero engines, the story features an inventor – Commander Caractacus Pott – who renovates an old car, which starts to demonstrate magical properties and involves the family in an thrilling adventure.

A film version was released in 1968, produced by Cubby Broccoli, co-producer of the James Bond films.

A successful version came to the stage in 2002, also produced by the Broccoli family.