This latest edition of Bond vs Bond is reviewed by Eoghan Lyng. 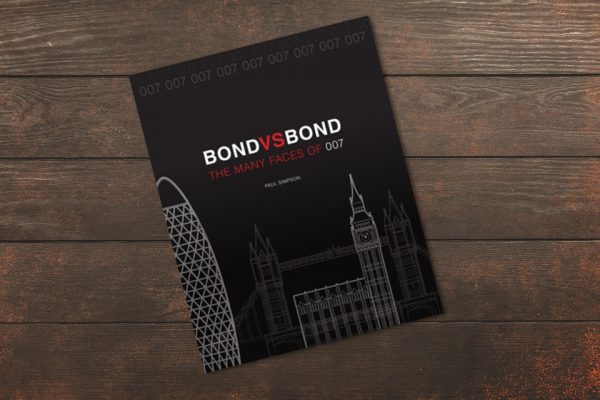 This Coronavirus is a bugger. It’s buggered up the workplace, the shopping trips, even the Bond series. In fifty years, no one has proven bigger or stronger than Bond. Then an invisible disease arrives to scurry the film into an undisclosed corner for six months. Danny Boyle’s departure had less of an impact on the series than the pandemic, a pandemic the Northern part of Ireland might be underestimating (if the virus fails to comply to film releases, it’ll hardly adhere to an island’s partition!)

On the plus side, it’s given me a chance to catch up on my Bond reading. And to cheer my worried face, I’ve read Paul Simpson’s Bond vs Bond: The Many Faces of 007. Originally published in 2015, this new edition has thoughtfully written about No Time To Die(a film that should be re-subtitled But Years For A Cinematic Release!)

Bond has worn many masks, almost as many as Peter Gabriel did while fronting Genesis. He’s had that blithe, foxy eyebrow-raised expression (Sir Roger). He’s had his hair tousled in the sultriest and sexiest of coifs (the ravishing Pierce). He’s spoken in Scottish, Australian and strangely Northern tones (Timothy Dalton’s “nasty” voice is that bit more Manchester than Wales). Bond’s worn many outfits, styles and faces in his time, which allows Simpson to assess what each man brought to the Eton educated sleuth.

Simpson points out that Ian Fleming had his beady eyes set on Moore’s saintly head, while Sean Connery modelled his persona, performance and posture on his fiery director, Terence Young. Simpson notes that Dalton studied the original books with feverish dedication, noting that Daniel Craig chose a similar path in 2006. Dalton’s portrayal has been met with greater interest in the last few years, perhaps in part due to the popularity of Craig’s Bond. Simpson praises Brosnan for the grace he showed the producers when they opted to replace him with a younger man. Although he curiously says George Lazenby was not a good fit for the franchise, he does qualify this statement with the knowledge that On Her Majesty’s Secret Service followed its source more closely than any other entry.

More interestingly, Simpson examines the books that made their way to the world’s omniplexes. Often forgotten in the wave of films that exploded in 1962, Simpson gives the books as much attention as the films. Though his author thought his character a “blunt instrument”, there is much to learn about the spy from reading the original prose. Licence To Kill took liberties with the stories it adapted, yet Dalton’s unbridled cigarette consumption comes directly from the books themselves.

The book comes fresh with colorful photos, a relief at this colour-less time, picturing the glamour and glitz that went into producing these extravagant films. Holding himself with imposed elegance, Mads Mikkelsen towers over the smiling Craig as the two are photographed attending the Casino Royale premier. Brosnan walks ahead of the carmine dressed Izabella Scorupco in one of Goldeneye’s sunnier stills. And then there’s a black and white portrait of Paul McCartney, his mullet one of the seventies more questionable accessories.

Simpson has done the series more than justice, and a must buy at this unjust time of year.