Edward Biddulph reports from the preview of a new exhibition at Bletchley Park. 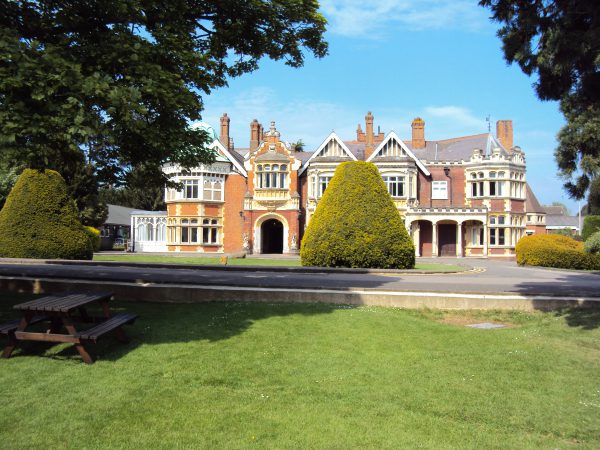 Hut 12 at Bletchley Park has become home to an exhibition that celebrates the literary James Bond through contemporary art and explores Ian Fleming’s connection with the centre of British World War Two codebreaking. I was present for a preview of the exhibition and to learn more about Fleming’s role during the war and hear author Anthony Horowitz talk about his latest James Bond novel, Forever and a Day.

On a glorious day at the Park, I joined fellow Bond enthusiasts and journalists in a marquee in front of the mansion to hear first from historian, Dr David Kenyon, who provided much of the research for the exhibition. David ran through the highlights of Ian Fleming’s career leading up to, and during, the Second World War. If there were any doubts that Fleming’s work took him to Bletchley, David dispelled them unequivocally. In David’s view, Fleming was the unofficial liaison between the Naval Intelligence Division and Bletchley. Documents show that Fleming had security clearance to read ‘Ultra’ reports and was present at meetings in which intercepted signals from the Luftwaffe were discussed. 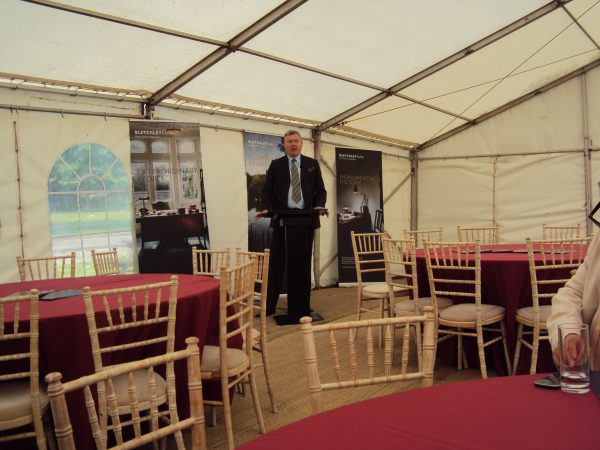 David reminded the audience about Operation Ruthless, Ian Fleming’s elaborate plan to ‘pinch’ Enigma code books from a German boat, and revealed that Bletchley’s codebreakers were left disappointed when the plan was reluctantly abandoned; Frank Birch, head of naval intelligence at Bletchley, described how codebreakers Alan Turing and Peter Twinn, having heard the news, came to him ‘like undertakers at Christmas’.

Next to speak was Anthony Horowitz, who has followed up Trigger Mortis, his very well received debut Bond novel, with Forever and a Day, which sees Bond in action before the events of Casino Royale. Anthony spoke about Ian Fleming’s early life and career and his love of ‘good food, gambling and girls’, not to mention motor racing (which inspired Trigger Mortis). The Second World War, however, was the making of Fleming. 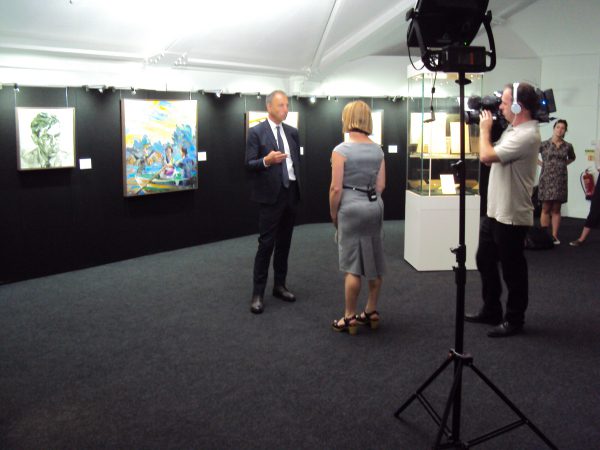 Anthony reflected on the three strands that have come together in the new exhibition: James Bond, of course, the Second World War and the world of the Special Operations Executive, which was very much part of his work on the TV series, Foyle’s War, and art; Ian Fleming himself had an interest in art and was involved in the design of the jackets of his books.

Remembering his own introduction to James Bond, Anthony revealed that the day he watched Dr No in the cinema and Ursula Andress coming out of the sea was the ‘day that my voice broke’. The film drew him to the books, which on reading, aged 9 or 10, he discovered a character that was unlike the heroes that had come before, such as Bulldog Drummond and Richard Hannay with their stiff upper lips. Of his own Bond novels, Anthony hopes that those who read them will go on to Fleming.

In was then time to move to Hut 12 and view the exhibition. There are some 15 artworks on display around the walls of the hut, all inspired by scenes or characters in the novels of Ian Fleming or Anthony Horowitz. I was impressed with them all. They gave a fresh perspective to the people and events of the novels, and were a pleasure to study. 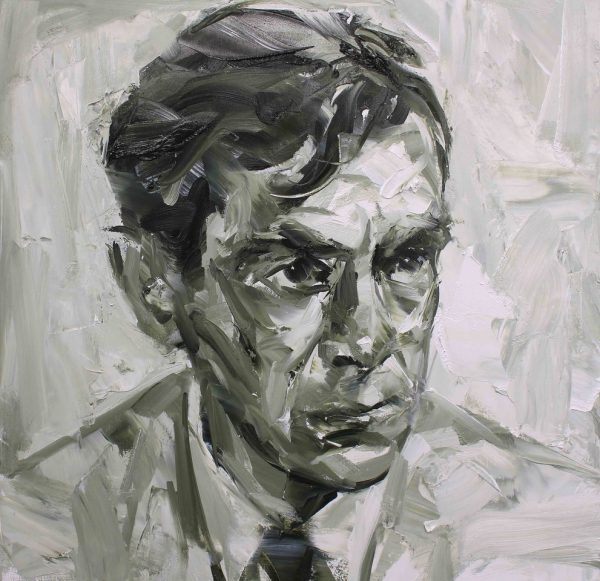 Paul Wright, ‘James – On Her Majesty’s Secret Service’ (2018), oil on linen. Inspired by the novel by Ian Fleming

I liked Paul Wright’s ‘Ernst’, a portrait of Blofeld as described in Thunderball, but the face wasn’t quite how I picture the villain. The artist’s portrait of James Bond, complete with comma of hair, was for me more successful. The painting catches Bond in reflective mood and with the heavy weight of duty on his shoulders, in keeping with its inspiration, On Her Majesty’s Secret Service. 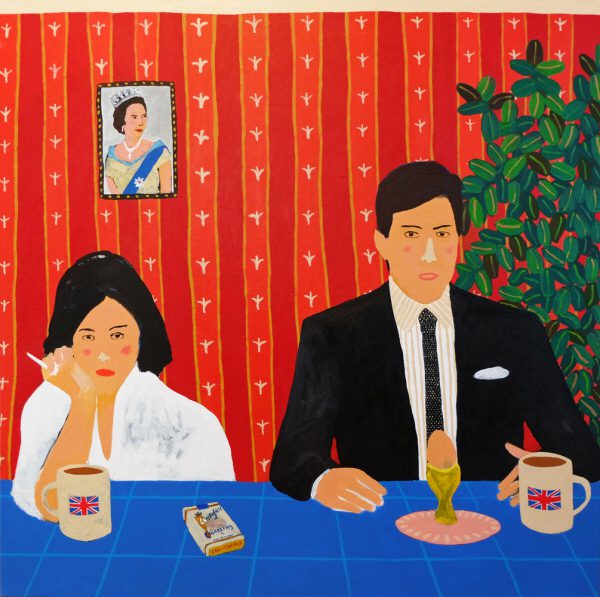 Alan Fears, ‘Bond at Breakfast’ (2018). Inspired by the scene in Trigger Mortis, by Anthony Horowitz, where Bond and Pussy Galore share an awkward breakfast in Bond’s flat.

I imagine that ‘Bond at Breakfast’, by Alan Frears, will divide opinion – where is the Minton china? – but I thought it bold and uncharacteristically domestic. Sammie Edgar’s ‘The Words are my Bond’ showed a silhouette of Bond formed by words associated with the character. That Bond’s gun spelled ‘ruthless’, reflecting Bond’s character, but also Fleming’s war, is a lovely touch.

Magnus Gjoen, ‘Goldfinger’ (2018). Inspired by the novel by Ian Fleming.

The standout piece is probably ‘Goldfinger’ by Magnus Gjeon, which, like the eponymous villain, is striking in its size and brilliance. Was the skull at its centre – a nod to Richard Chopping’s iconic cover of the novel – also within its own gunbarrel, I wondered.

The main space of Hut 12 was filled with cases displaying the work of Ian Fleming and other Bond authors, as well as some of the documents linking Fleming to Bletchley Park. I was amused by one letter by Fleming, in which he responds to the suggestion that codes could be hidden within music. Acknowledging that the idea could have come from Hitchcock’s The Lady Vanishes, Fleming continues: ‘If we had to start teaching naval offices to play the violin before they could decode signals, we would take a very long time to win the war.’

‘Bond and Bletchley’, put together by Bletchley Park, creative social enterprise Eazl, and Ian Fleming Publications, is an exciting, thought-provoking, and to an extent challenging exhibition that is a must-see, preferably fresh from reading Anthony Horowitz’s Forever and a Day. At the end of the exhibition, the artwork will be sold at a charity auction, with proceeds going to Kidscape, Beanstalk and The Reading Agency. Start saving up those B – Bond 10p pieces!

Edward Biddulph is the author of Licence to Cook and “‘James Bond was not a gourmet’: An archaeology of James Bond’s diet’”, published in the journal, Food, Culture and Society. He also runs the blog James Bond Memes.