20 years of The James Bond Dossier

It’s quite incredible to think that in the year that the James Bond movies celebrate their 60th anniversary this website has been online for 20 years. The site was first launched on a subdomain sometime in January 2002 although the exact date is lost in the sands of time. 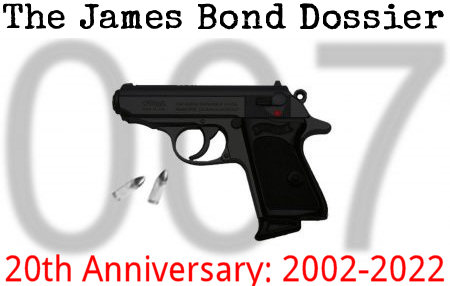 For the first few years it was called For Your Eyes Only, only switching name and domain in March 2005, at which point it became The James Bond Dossier.

I started it soon after moving to Barcelona, when I had plenty of time of my hands. The initial idea was to cover the books only using The Book of Bond: Or Every Man His Own 007 as an inspiration. While that book takes an amusing look at Bond’s habits and lifestyle it doesn’t go into the kind of depth I was looking for.

So, here we are a full two decades later. During that time we have had Pierce Brosnan’s last outing as 007 and the Daniel Craig era. We’ve had several continuation novels, comics and the whole idea of the James Bond Lifestyle. Numerous writers have contributed to the site over the years and I started a monthly newsletter. And over that time we’ve seen the rise of social media with the births of Facebook, Twitter, Instagram and YouTube.

There is still plenty of work left to do on the website and perhaps one day I’ll consider it actually finished.

Whether you have been visiting the site for years or only just found it, thank you for coming along for the ride!