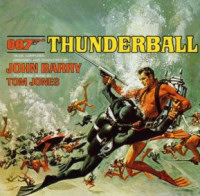 The success of the first three James Bond films in the early 1960s had led to a huge array of copycat spy thrillers. In an attempt to ensure the Bond franchise remained at the forefront of the action genre, Cubby Broccoli and Harry Saltzman decided to make Thunderball, Fleming’s ninth James Bond book.

With a budget of six and a half million dollars, Thunderball pulled no punches in its action sequences and gadgets. From Bond’s ‘jet-pack’ in the pre-credit sequence to the multi-million dollar hydrofoil Disco Volante, the film was grander and more lavish than any of the previous films.

After the commercial success of the soundtrack to Goldfinger, John Barry was once again asked to compose the score to Thunderball. His immediate problem was how to incorporate the unusual film title into a coherent song. No-one was entirely sure what a ‘thunderball’ was – the term was used in the film simply as the name of the operation to recover the two atomic bombs from SPECTRE.

Not lending itself to lyrical treatment, Barry decided to compose an alternative theme for the film. Teaming up once again with lyricist Leslie Bricusse (with whom Barry had worked on Goldfinger), Barry composed a song entitled Mr Kiss Kiss Bang Bang – a nickname that Bond had been given by Japanese audiences. The film also featured the ‘Kiss Kiss’ club – the site of the death of SPECTRE assassin Fiona Volpe.

Barry recorded Mr Kiss Kiss Bang Bang with both Shirley Bassey and Dionne Warwick and then used the basic melody from the song as the basis for the remainder of his score, as he had done with previous films. Indeed, the tune from Mr Kiss Kiss Bang Bang can be heard on tracks such as Cafe Martinique and Death of Fiona. The jaunty tune worked well as the backdrop for the scenes depicting the vibrant Nassau nightlife, and the Bahamian Mardi Gras celebrations.

However, shortly before the premiere of Thunderball, Barry was asked to write a new theme for the film. Producers Broccoli and Saltzmann realised that the previous films had featured the film’s title in the song and they believed that Thunderball also needed a song with the title included.

Experiencing the same lyrical problems as he had encountered previously, Barry turned to lyricist Don Black. Black came up with some vague and ambiguous lyrics which could easily have been used to describe villain Emilio Largo as Bond himself. Barry opened the song with a terrific six note brass fanfare, taken directly from the James Bond Theme, and the pair invited heartthrob Tom Jones to record the song.

Jones reportedly passed out after hitting the long, sustained high note at the end of Thunderball. The Welsh singer said of the final note, “I closed my eyes and I held the note for so long when I opened my eyes the room was spinning.”

Interestingly, American singer Johnny Cash also submitted a track to Eon Productions for their consideration. Whilst Cash’s Thunderball lyrics are much more appropriate to the story of the film, the shuffling sound and Cash’s very earnest baritone do not fit the Bond model and the song was not used.

Having provided the title theme that the producers were looking for, Barry set to work on completing the soundtrack. This included an instrumental, orchestral version of the ‘new’ Thunderball theme. With a large number of underwater sequences in Terence Young’s film, Barry wrote several atmospheric underwater tunes using flutes and strings. He also brought back his famous seven-beat 007 theme to superb effect and this pulsating piece is used during Bond’s spectacular underwater battle below and aboard the runaway Disco Volante.

Both Bassey and Warwick’s versions of Mr Kiss Kiss Bang Bang were omitted from both the film and soundtrack and were not released until the 1990s. Neither, interestingly, appears on the remastered soundtrack CD for Thunderball, although both are available elsewhere. Warwick’s is, perhaps surprisingly, the superior version.

Film reviewers were divided on the release of Thunderball. Many applauded its ambition and action whilst others were critical of its running time and prolonged underwater sequences. I’m firmly in the latter category – I think Thunderball is one of the slowest and weakest of all the films – and I also don’t regard Barry’s soundtrack as one of his finest.

His use of his 007 theme for the climactic action sequences is terrific and Mr Kiss Kiss Bang Bang song would undoubtedly have made a better title theme. However, unlike Goldfinger, the rest of the soundtrack seems to plod along in much the same way as the film does. Bond creeps around anonymously an awful lot in Thunderball, and the music seems to creep along anonymously with him.