The historic centre of Mexico City featured prominently in SPECTRE. Here we take a details look at Bond’s movements while there.

As is often the case in films, not everything is as it seems. When James Bond and Estrella enter the hotel it is not the Gran Hotel Ciudad De Mexico (82 Avenida 16 de Septiembre), whose logo it bears, but a building located at 12 Calle de Tacuba.

The elaborate interior with the cage-style lift was shot in the hotel itself though. There are two lifts in the hotel, which you can see if you navigate the panoramic photo. You can even “walk” into on of the lifts.

The drummers seen at the start are in front of the National Art Museum at Plaza Manuel Tolsá, just along from the fake hotel entrance. 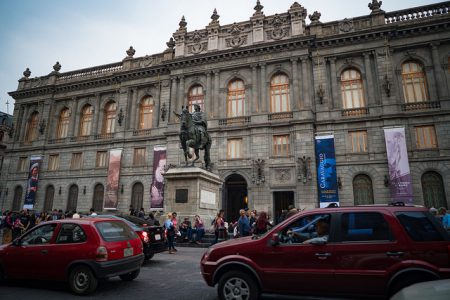 After Bond exits his room via the window the Palacio de Minería (Palace of Mining), opposite the art museum, is seen behind Bond. But the building Bond would be on if he were really there, the old headquarters of the senate of the republic on 9 Xicoténcatl, is quite different from how it is portrayed in the film. For instance. there is no alleyway between buildings for Bond to jump over in real life.

Once he gets to the the back of the building real life takes over again though. At 24 Calle Donceles you’ll find the historic Teatro Fru Fru. The meeting between Marco Sciara and Gallo takes place in a room within theatre building. This is where the explosion takes place, causing its facade to collapse. 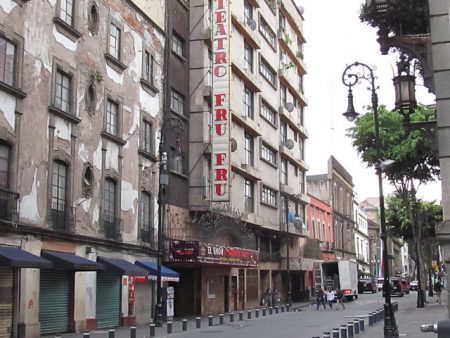 Teatro Frou Frou was the building in which Marco Sciarra is seen meeting his associates. Photo by Rafael Alcázar Romero.

Afterwards Bond chases Sciarra as he nears a helicopter in the middle of the Zócalo. During the fight in the now airborne helicopter you can see much of Mexico City’s historic centre spinning past, including the Cathedral.