Home > Books > Forever And A Day

Forever And A Day

Forever And A Day is the title of Anthony Horowitz’s second James Bond continuation novel. 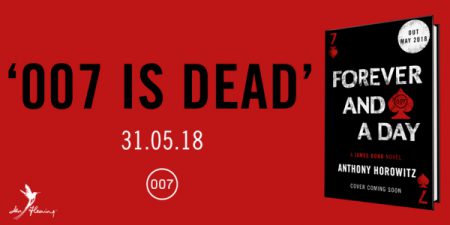 Order from Amazon UK. It will also be published in the US later this year and can be pre-ordered from Amazon.com.

The novel will be released in the UK on 31st May 2018, three days after what would have been Ian Fleming’s 110th birthday.

Like Trigger Mortis (2015), which was Horowitz’s first continuation novel featuring James Bond, Forever And A Day includes some original material written by Ian Fleming. The new book is set prior to the events of Casino Royale (1953), the first of fourteen 007 books by Ian Fleming. There have also been numerous additions to the series by various other authors.

From the press release it sounds as if the book will go into how Bond was awarded his double-O status. The two kills required to earn his licence to kill are briefly mentioned in Casino Royale. In chapter 20 of Casino Royale, “The Nature of Evil”, Bond tells Rene Mathis about them.

The first was a Japanese cipher expert working on the fortieth floor of the Rockefeller center in New York, who was cracking Allied codes. Bond shot him from an adjacent skyscraper. His next kill was a Norwegian double agent working for the Germans. Bond stabbed him to death in his flat.

The book is due in the US later in the year and available to pre-order from Amazon.com

Once the book has been released we’ll review it and take an in-depth look at food and drink, friends and foes, locations and brands.

Latest on Forever And A Day