Doctor No: Locations from the novel

Doctor No once again finds 007 in Jamaica. 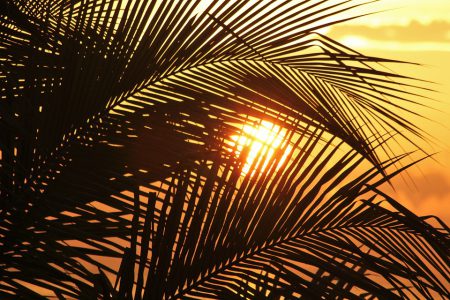 At the beginning of Doctor No James Bond has just been released from hospital. After nearly dying at the end of his previous mission, Bond’s doctor urges M to send him on an easy assignment. And it turns out that’s exactly what the head of the Secret Service had in mind.

He sends Bond to Jamaica to investigate the disappearance of the local Secret Service man and his assistant. Bond previously met John Strangways during the events of Live And Let Die. But while M feels that Strangways and his assistant have simply eloped, Bond isn’t so sure.

He asks for details of what Strangways was working on just before they disappeared, just in case the two are connected.

A week later Bond arrives arrives in Kingston aboard a Super Constellation. On the dusk approach to Palisadoes Airport he looks at down at the harbour, watching blinking lighthouse at the entrance to the harbour.

Today known Norman Manley International Airport, the airport was built in 1948. Prior to that it was an airstrip and then an RAF base.

Bond is met at the airport by Quarrel, who drives him to the Blue Hills Hotel off Junction Road, the main road that connects the north and south of the island.  The Blue Hills is apparently based on the Blue Mountain Inn, although that was located on Gordon Town Road and appears to have closed some time in the early part of this century.

Later Quarrel takes Bond to a restaurant he knows on the waterfront. The Joy Boat is owned by a friend of Quarrel’s known locally as “Pus-Feller” after once fighting a large octopus. It’s rather difficult to place the restaurant with any precision as Fleming’s directions are rather vague, but presumably it was based on somewhere he knew.

The following morning Bond has an appointment with the Acting Governor at King’s House. He is about as unhelpful as Bond expects but finds an ally in the Colonial Secretary, Pleydell-Smith. The latter takes Bond to lunch at the fictional Queen’s Club, which was probably inspired by The Liguanea Club.

After lunch Pleydell-Smith takes Bond to the Jamaica Institute (more correctly, the Institute of Jamaica) and introduces him to the head of the map section. There Bond makes a rough sketch map from a ordnance survey map of Crab Key. Afterwards Bond returns to his hotel by taxi, where he doesn’t quite have the quiet evening he planned.

The next morning Bond and Quarrel drive to the north of the island. Bond drives the winding Junction Road through Stony Hill until they reach Port Maria. From there they continue to Morgan’s Harbour with the Isle of Surprise “just as Bond remembered”. 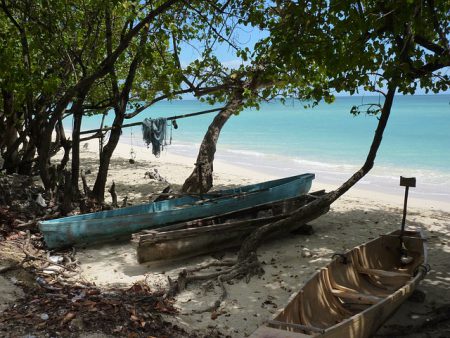 Boats on a beach in Jamaica (Pixabay)

A side road leads them through cane fields surrounding the ruins of the “old Great House of Beau Desert Plantation” to the bungalow they previously rented in Live And Let Die. Fleming tells us it is a white, single storey house.

After a few days of training they plan on sailing to Crab Key at night. Quarrel tells Bond they’ll sail for seven or eight hours then drop the sail to avoid radar. They’ll approach the island by paddling the final distance.

Prior to setting off they both go to Port Maria for supplies. While Quarrel rents a canoe, Bond outfits himself in black canvas jeans, a dark blue shirt and rope-soled shoes.  For Bond, at least, it’s the only time he leaves their training camp during those three days. The remainder of the time is spent swimming, running, sunbathing or being massaged as he gets back into shape for the mission.

Later, after returning from Crab Key, Bond learns the Great House was owned by the parents of Honeychile Rider, who he meets on the island. She lives in the basement and insists that he visit her. Bond owes her “slave-time”, she tells him.

Fleming places Crab Key “about thirty miles due north of Galina Point on the north shore of Jamaica and about sixty miles south of Cuba”. When they finally reach land they find the beach is black sand. In reality though there is nothing there but sea. 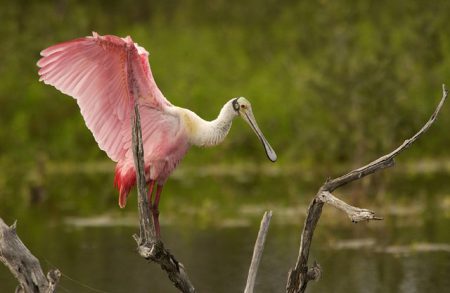 Crab Key has a colony of Roseate Spoonbills (Pixabay)

After sleeping for a few hours, Bond sees a girl on the beach. Her arrival under sail has alerted Dr No and soon they evade capture in the mangrove swamps until, eventually, they are finally captured. Dr No’s lair is built into the rock of the mountain and Bond isn’t at all expecting what he sees. Fleming tells us it’s “the sort of reception room the largest American corporations have on the President’s floor in their New York skyscrapers”.

Everything about the place, from the way it is furnished to their treatment by the staff, is more like a clinic than a prison.