Like Javier Bardem, Ralph Fiennes is another actor linked to Skyfall months before it got under way. It was finally confirmed at the press conference in November that Fiennes had been signed in an unspecified role; however there is much discussion that Fiennes could mark the return of Ernst Stavro Blofeld to the James Bond films.

Ralph Fiennes was born on the 22nd of December 1962 in Ipswich to parents, Jennifer Fiennes, a writer and Mark Fiennes a photographer and farmer. After his family’s move to Ireland in 1973, Fiennes was raised in West Cork for several years. His education involved periods at the St Kieran’s College and the Newtown School in County Waterford.  He completed his education at the Bishop Wordsworth School when his family once again moved to Salisbury, England.

He enrolled in the Chelsea College of Art & Design and the Royal Academy of Dramatic Art. He would later go on to join the National Theater and eventually the Royal Shakespeare Company in his rise to becoming a popular star.

In 1990 he starred in his first television film A Dangerous Man: Lawrence after Arabia. The following year, he guest starred in the popular TV series Prime Suspect. Ralph Fiennes silver screen debut was in 1992. Starring opposite Juliette Binoche, he played the role of Heathcliff in Wuthering Heights. The film was well received particularly within Europe.

His breakthrough year was however not until 1993. His portrayal of Amon Goeth, the camp commandant in Spielberg’s Schindler’s List earned him critical acclaim including an Oscar nomination and an eventual BAFTA award—both for the best supporting actor. To play the character convincingly, he gained several pounds for the movie but managed to shed it afterwards.

He followed his success by starting in Quiz Show (1994) and Strange Days (1995). In 1994, his performance The English Patient a World War II romance movie earned him another Academy award nomination for Best Actor. He also received similar nominations from the Golden Globe, Satellite Award and BAFTA. His career hit a brief spell with 1998’s The Avengers but, following a quick foray into animation with The Prince of Egypt, he returned with a string of critically acclaimed hits some of which include Sunshine (1999), The End of the Affair (1999) and Spider (2002).

In Red Dragon (2004), Fiennes once again played the role of a sadistic and ruthless villain. He continued in this trend by playing the role of Lord Voldemort in four different Harry Porter movies.

Fiennes work was however not only limited to the silver screen. He received a lot of critical praise for his stage work one of which was a 2007 nomination for a Tony Award based on his performance in the play Faith Healer.

Following the withdrawal of Pierce Brosnan, he was among the many favorites in the running for the position of James Bond however the role would eventually go to Daniel Craig. He was also considered to play the role of Robert Langdon in the film The DaVinci Code before the role was given to Tom Hanks. His other list of film credits includes The Duchess (2008), The Reader (2008), The Hurt Locker (2009) and Clash of the Titans (2010).

Fiennes is the eldest of six children. His siblings include Joseph Fiennes, an actor; Martha Fiennes, a director; Sophie Fiennes, a film maker, Magnus Fiennes, a composer; and Jacob Fiennes, a conservationist. Fiennes is an extended relation to the Prince of Wales (8th cousin). He divorced his wife in 1997 after a relationship that lasted over 13 years. 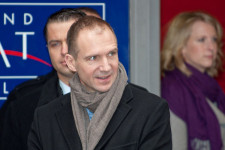