Doctor No: Characters from the novel 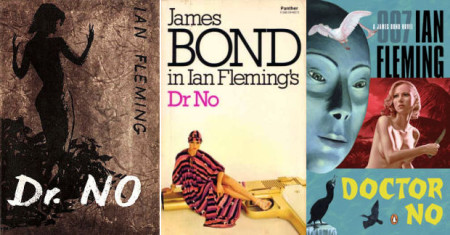 Once again Bond hires the Cayman islander who worked for him previously in Live And Let Die.

Quarrel runs errands for Bond and helps him get back into shape. Most importantly though he sails Bond from the north coast of Jamaica to Crab Key. Unfortunately it is to be his final voyage.

After a frosty reception from the acting Governor, Bond finds an ally in the Colonial Secretary, Pleydell-Smith.

As well as providing Bond with background information he arranges for the analysis of a basket of fruit Bond suspects is poisoned. Bond is right.

Bond’s first sight of Honey Rider is on the beach at Crab Key. She is there to collect rare shells and completely naked.

Orphaned at the age of five, she was brought up by her nanny in the cellar of the great house which belonged to her parents.

Unfortunately her arrival on Crab Key under sail has alerted Dr No. Soon his men are after Bond, Quarrel and the girl.

Born to a German father and a Chinese mother, Dr No is extremely tall, wears a kimono and has pincers in place of hands. He also wears contact lenses.

After becoming involved with the criminal Tongs in Shanghai, No later moved to New York. There he was eventually treasurer of a Tong and used his position to steal a million dollars in gold. Tracked down, he was tortured in an effort to reveal where he had hidden the stolen gold.

When he refused they cut off his hands and shot him in the heart. Fortunately for him, he was one of the few people to have his heart on the right hand side of the body and so he survived.

After spending time in hospital he decided to study medicine. After completing his studies he looked around the world for a base that would be safe from the coming war. Eventually he bought Crab Key where he set up his operations, including the industrialisation of guano.

But his real purpose is to interfere with the test flights of US guided rockets. It turns out Dr No is working with the Russians.

A freelance photographer for the Daily Gleaner, Annabel Chung twice photographs 007 for Dr No.

One Response to “Doctor No: Characters from the novel”