Diamonds Are Forever: characters from the novel 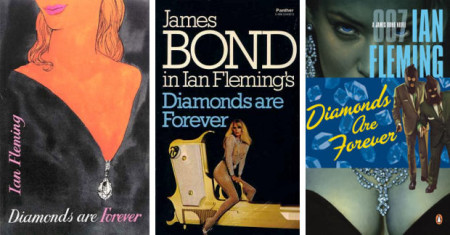 Employed by the Spangs as a dealer at The Tiara hotel and casino, Tiffany Case is also directly involved with their diamond smuggling operation.

Bond finds her initially to be frosty but she agrees to meet him for dinner at the 21 Club as long as “the job goes off okay”. Later Felix Leiter tells him about how she was gang-raped by local mobsters. Her mother was the madam of a San Francisco brothel and stopped paying them protection money.

She starts helping Bond out after Bond finally wins her over. At the end of the book they are headed for Britain on the Queen Elizabeth. On arrival she will move into Bond’s small Chelsea flat…

Bond’s ex-CIA pal is back for the first time since being fed to the sharks in Live And Let Die. Now working at Pinkerton’s, Leiter is investigating the same horse on which Bond has been told to bet in Saratoga.

Leiter takes Bond for a tour around the jazz clubs of Harlem and then drives him to Saratoga in his Studillac. There he introduces Bond to bourbon and branch water. Leiter later meets Bond and Tiffany in Los Angeles after they escape from the Spangled Mob and arranges their berths to Britain.

A Las Vegas cab driver working undercover for Pinkerton’s, Ernie Cureo meets Bond at the airport. He acts as a bit of a tour guide while and ferrying Bond around town. He is shot while trying to evade the Spangled Mob but makes it to the hospital and fills in Felix Leiter on what has happened to Bond.

The character is named after Bond’s friend Ernest Cuneo, who during the Second World War worked as a liaison officer for the Office of Strategic Sevices (OSS), the forerunner of the CIA, MI6, the State Department, FBI and US President Franklin Roosevelt.

Bond meets him at his office at Scotland Yard to learn more about the Spang’s diamond smuggling operation. Vallance arranges for a heavily disguised 007 to meet Rufus B Saye at the London HQ of House of Diamonds.

The Spangled Mob is run by twin brothers Jack and Seraffimo Spang, and considered by the FBI to be one of the most powerful gangs in the US. While Seraffimo operates from Las Vegas, Jack is based in London under the name Rufus B Saye.

The Spang’s legitimate businesses include the Tiara Hotel in Las Vegas and the House of Diamonds in New York and London. However they are also involved in diamond smuggling, illegal horse betting, narcotics and prostitution.

Wint and Kid are a pair of killers working for the Spangled Mob, apparently a couple. Leiter tells Bond that Wint is a sadist but hates travelling.

After Bond and Tiffany are taken to Spectreville, Wint and Kid kive Bond a “Brooklyn stomping” after changing into football boots. The pair of gangsters later tail them onto the Queen Elizabeth where they try and eliminate Bond and the girl.

Based in New York, Michael “Shady” Tree runs the narcotics and prostitution operations of the Spangled Mob. Fleming describes him as a redheaded hunchback with a big peaceful moon-shaped face”.

Tree pays Bond part of his fee for smuggling uncut diamonds to New Nork and instructs him how he is to collect the remainder in Saratoga.